“It's important for people to be themselves, and to feel accepted and loved,” Hurley said. “‘The Rocky Horror Picture Show’ – as wild and crazy as it is – is all about giving people a chance to be themselves.”

Audiences can catch a free glimpse of the production when the largely SVSU student-based cast performs three of the production's musical numbers at the Great Lakes Bay Pride Festival Saturday, June 29, at about 3:25 p.m. at the World Friendship Shell in Bay City's Wenonah Park.

Full performances of “The Rocky Horror Picture Show” are at 7:30 p.m. Wednesday through Friday, July 10-12, as well as Sunday, July 14. A late showing is set for 10 p.m. Saturday, July 13. All performances are in SVSU's Black Box Theatre, located in Curtiss Hall, room C180.

There is no ticket price; instead, attendees are asked to donate money for admission. Half of the proceeds will benefit The Human Rights Campaign, a national civil rights organization dedicated to achieving lesbian, gay, bisexual, transgender and queer equality. The remaining proceeds will be used to fund future plays that are both affordable and support social issues, Hurley said.

“I wanted to impact the community – not just produce art – and so I wanted to make this event affordable for people who can't always afford to buy tickets to plays while also allowing people to support this important cause,” said Hurley, a theatre major from Essexville. 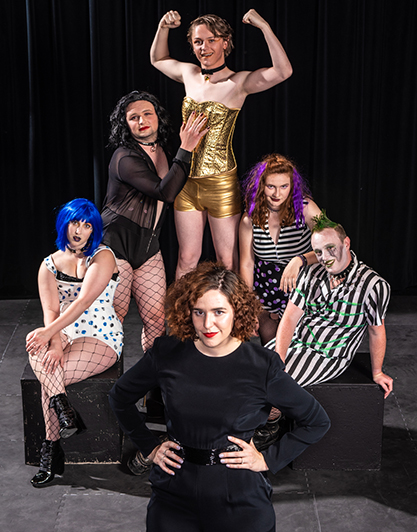 “The Rocky Horror Picture Show” is the first production to fly under the banner of Rebel Theatre Co., a theatre ensemble Hurley founded with a mission statement promising to “enact social awareness and change.” She said the organization – featuring a number of her peers in SVSU's theatre scene – aims to create partnerships within the community, enables social change, and provides a safe, welcoming environment for performers and audiences to enjoy the arts.

“I want to tell important stories that impact people beyond the stage,” said Hurley, the group's artistic director.

Hurley is an actress – she played one of the three leading roles in SVSU's April production of “9 to 5" – but she will remain largely behind the scenes as producer for “The Rocky Horror Picture Show.” Hurley will play a small role in the ensemble. The rest of the cast and crew includes a mix of SVSU theatre students, as well as alumni with experience in the region's theatre community.

“None of this would be possible without the dedication and hard work of my outstanding team,” Hurley said.

While SVSU's Department of Theatre is not producing this particular play, its faculty and the university are providing support for Hurley's endeavor. SVSU’s Undergraduate Research Program awarded Hurley’s proposal for the project a $4,500 grant to cover production costs, marketing and surveys researching the play's impact on the community. Margaret “Peggy” Mead-Finizio, assistant professor of theatre, and David Rzeszutek, associate professor of theatre, will serve as advisers on the production.

In producing the play, Hurley is applying leadership skills and leadership developed in one of SVSU's Programs of Distinction. Hurley in 2018 was selected as one of 10 members of the SVSU Roberts Fellowship Program, a year-long leadership development initiative that exposes students to influential figures in business and culture. The program concludes with a 2-week trip across Asia. Hurley returned from that visit in May.

Attending “The Rocky Horror Picture Show” does not require purchasing tickets, but to ensure a seat at a showing, Hurley advises those interested to reserve seats at the following URL: https://www.eventbrite.com/e/the-rocky-horror-show-tickets-60083353929?aff=ebdssbdestsearch