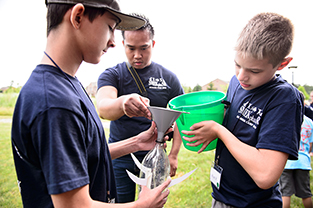 For over 20 years, dozens of youths from across the Great Lakes Bay Region have flocked to Saginaw Valley State University every summer to take part in the university’s Science and Mathematics Extravaganza for Kids (SMEK) summer camps. There, children from grades 2 to 8 take part in fun and educational activities that engage their interests in the science, technology, engineering and mathematics (STEM) fields.

Participants took part in hands-on, project-based lessons taught by area educators assisted by SVSU undergraduates aspiring to become teachers themselves. SVSU College of Education undergraduates earned a chance to practice their classroom management skills during the SMEK camps by serving as mentors who helped take groups of campers from one activity to another while assisting teachers during activities.

Tamara Barrientos, director of SVSU’s Regional Mathematics and Science Center, started at the university as a student employee in the 1990s and has remained involved in the SMEK camps since the start.

“We were doing all that stuff even before the ‘STEM’ buzzword came along,” Barrientos said. “We just wanted (student participants) to see that these activities could be engaging and fun.”

This year’s theme was “The Sky Is The Limit.” One of the activities involved campers creating "drop packages." The goal of this activity was to have a weighted package fall from a set height as slowly as possible. This type of activity was an ideal way to present young people with a problem that featured multiple solutions and opportunities for creative thinking, Barrientos said.

“Whether they are coming into fifth grade or coming into eighth grade, they are bringing an idea and working in groups.” Barrientos said. “They’re asked to do some brainstorming as a group, and every student gets to bring their ideas to the table.”

Other activities this year included designing airplanes, learning about lightning and launching water pressure-powered rockets made from plastic bottles into the sky.

“I hope they come away understanding that math and science aren't things that just have one answer to them,” Barrientos said.

“There is a process, it’s fun, and there is room for failure. We actually want them to learn from what doesn’t work and explore how we can change it and make it better. This whole idea of math and science is creating something, planning it, revising it and making it better.”