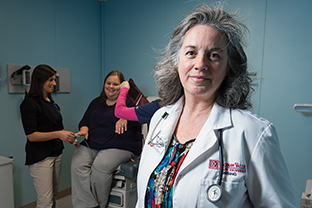 Determined to be part of the solution for Michigan's opioid epidemic and other health problems plaguing rural Michigan, Saginaw Valley State University sought and secured a $2.8 million federal grant to combat the most pressing health crises in some of the state's most under-served communities.

SVSU will empower a new generation of psychiatric mental health nurse practitioners to serve on the front lines of patient care. It's an initiative that could prove transformative to rural communities in Michigan where thousands suffer from the opioid epidemic, SVSU leaders say.

"Families and communities are being destroyed. Those in rural areas who are seeking care often have to travel up to 100 miles and wait two or three months to receive addictions treatment. Sadly, many die while they wait. This educational grant will target this significant treatment gap."

The four-year grant from the Health Resources and Services Administration - an agency of the U.S. Department of Health and Human Services - will result in SVSU enrolling 25 nurse practitioners each year as students in the university's psychiatric mental health nurse practitioner post-graduate certificate program. Eventually, SVSU expects 100 students to complete the program as a result of the grant.

Those who earn the certification will serve as the front-line health care responders to patients suffering from drug abuse. Considered one of the nation's hardest-hit states by the opioid epidemic, Michigan also happens to employ a dangerously-low number of psychiatric mental health nurse practitioners trained to treat substance use disorders.

The $2.8 million initiative at SVSU will aim to heal people in those ailing communities by raising the number of professionals trained to treat individuals suffering from addiction. In Michigan's rural regions, both stigma and lack of access to treatment are significant barriers to care for those struggling with substance use disorders.

"Rural populations are disproportionately impacted by mental health conditions and substance use disorders," Schachman said. "Rates of drug overdose deaths are rising in rural areas, surpassing rates in urban areas. In particular, the opioid epidemic has had a compounding ripple effect throughout rural communities, affecting quality of life, economic opportunity, and rural prosperity."

Of the 4,391 nurse practitioners in Michigan, fewer than 3% are psychiatric mental health nurse practitioners. Schachman said increasing that percentage is especially important in Michigan, a state which ranks second in the nation in drug use, according to a 2019 study by the website Wallethub. The study was based on data analyzing metrics such as opioid prescriptions, arrest and overdose rates and meth-lab incidents per capita. Only Washington D.C. ranked higher than Michigan in the study.

"A quarter of the counties in Michigan don't even have a health care provider who can prescribe buprenorphine, a potentially life-saving medication for those with opioid addiction," Schachman said. "Every one of those counties are designated as rural, which illustrates the disparities in addictions care experienced by rural residents."

Schachman and her SVSU colleagues are familiar with how the problem has impacted Michigan and the Great Lakes Bay Region. She helps oversee the Bay Community Health Clinic, a Bay City-based medical facility operated jointly by SVSU, the Bay County Department of Health, and Bay-Arenac Behavioral Health. There, staff and student interns respond to local residents, including a growing number of individuals dealing with opioid addictions.

"Particularly in rural areas, nurse practitioners are on the front lines in battling the opioid epidemic," Schachman said. "The educational and clinical training activities provided in the psychiatric mental health nurse practitioner program will better equip them to effectively treat patients with substance use disorders, and will bring needed resources to rural communities."

The $2.8 million grant will afford SVSU funds necessary for a number of the program's goals.

In part, it will support stipends for the certification program's students, who typically are working as primary care nurse practitioners in some of the state's most under-served areas. The stipend will encourage people who might otherwise be unable to sacrifice work hours while pursuing such training, Schachman said.

"Traditionally, students work full-time while pursuing advanced nursing education," Schachman said. "This grant offers a significant stipend that offsets a substantial portion of their educational expenses. With this financial support, students may be able to reduce their work obligations to better balance their work, family and school roles."

The federal grant also will support a new clinical-academic partnership with Recovery Pathways, an interdisciplinary substance use and mental health disorder treatment center with clinics serving nine Michigan counties. Seven of those counties are considered rural. Students in SVSU's program will receive training and help treat patients served by Recovery Pathways. There, students will also learn about telehealth, a form of medical practice that in part utilizes telecommunication technology modified for health care-related response to patients in distant communities.

SVSU graduates – though nationally certified – have shown a commitment to remain in Michigan. Of the 171 SVSU family nurse practitioner graduates since 2010, 89% remain employed in the state, and of those, 62% practice in rural or under-served communities.