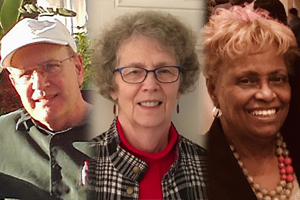 An educator, an advocate for peace and the leader of a local NAACP branch will be honored at Saginaw Valley State University this month for community work that exemplifies the spirit of Martin Luther King Jr.'s vision.

The three recipients - one each from Bay, Midland and Saginaw counties - will receive a $1,000 award for a charitable organization of their choice.

The honoree from Bay County is Gibson, a retired flight instructor and educator who taught students at Bay City Public Schools for 26 years. He taught aviation courses at Averill Career Opportunities Center in Saginaw as well as Delta College. Several of his students joined the U.S. Air Force or became pilots working for major airlines. From 1996 to 2013, Gibson himself served as a corporate pilot.

In 2002, Gibson was elected as a trustee with the Bay City Public Schools Board of Education. He helped lead the school district until 2015.

The Martin Luther King Jr. Drum Award honoree from Midland County is Schaller, who leads the Midland chapter of Nonviolent Peaceforce, a nonprofit organization working to "transform the world's response to conflict."

She worked as a peace advocate for a number of organizations including Community Resolution Center, which has offices in Saginaw and Flint. She also helped lead both Midland Interfaith Council for Peace and Justice as well as the Midland-based Helen M. Casey Center for Nonviolence. At age 68, she became a member of the Rotary Peace Fellowship. She earned a professional development certificate in conflict resolution and peace in 2015 at Chulalongkorn University in Thailand.

Wilson is the Martin Luther King Jr. Drum Award honoree from Saginaw County. Wilson who just retired as president of the Saginaw branch of the NAACP, the second-largest chapter in Michigan. Wilson joined the NAACP 50 years ago. She has served as area director of the organization's Michigan statewide conference as well as its state treasurer. She was the recipient of Michigan's NAACP President of the Year Award in 2008.

Then- Gov. Jennifer Granholm appointed Wilson to SVSU's Board of Control in 2005. She served on the board until 2013. In 2016, she received the Distinguished Service Award, SVSU's most prestigious award given to a member of the community. She remains involved in the institution as a member of the SVSU Diversity Council.