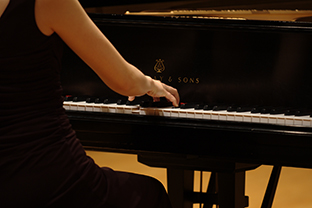 Franz Schubert was a 19th century Austrian composer whose body of work included symphonies, operas and vocal works. During his relatively short career — he died at the age of 31 — his work was admired by a small circle of followers in Vienna. His music was rediscovered years after his death, and its popularity reached across the globe.

Trepanier is familiar with musical tastes from across the globe. She has performed at venues in Bolivia, Puerto Rico and South Korea. She also is familiar with local tastes in music. The Midland resident has performed with the Saginaw Bay Symphony Orchestra. Trepanier, an adjunct faculty member at SVSU, also has headlined piano recitals at the university for more than a decade. Most recently, she performed at SVSU in September 2018.

She received a Doctor of Musical Arts in Performance degree from Michigan State University. She also graduated as valedictorian from Kyungwon University in Seongnam, South Korea, where she completed her bachelor's degree in music.

For more information about Trepanier, visit her website at www.mijungtrepanier.com/.