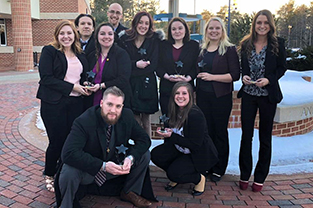 With six other universities in attendance, SVSU's team earned second place in the Team Sweeps category, where the competition is ranked by adding the total combined points earned by each team in the contest's individual categories.

Because of their outstanding performances in those individual categories, four SVSU students qualified for the league's national tournament later this year. Those qualifying students include the following:

The group isn't the first from SVSU to qualify for this year's national tournament. During an October 2018 contest hosted at SVSU, six students qualified. Then, in December 2018, nine more SVSU students earned the same distinction during a competition at Eastern Michigan University.

The next forensics tournament for SVSU is the MISL State Tournament, scheduled Saturday, March 2, at Eastern Michigan University.