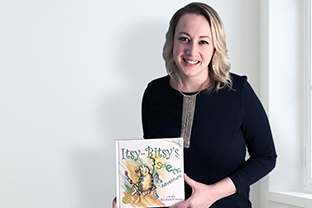 When her daughter was two, Jennifer Douglas read an article that encouraged parents to "make up science stories for your children" in order to inspire their interest in the subject.

"So, at bedtime, I would refer to one of her favorite books and add a science spin on it," Douglas said. "She grasped the concepts quite quickly, but when I tried to buy books to aid me in my quest, I found they didn't readily exist."

So the Saginaw Valley State University alumna took matters into her own hands. She authored the recently-published "Itsy-Bitsy's Science Adventure," a 28-page children's book aimed at encouraging interest in science, technology, engineering and math — known as STEM, for short — among children.

"I wanted to be an inspiration to my children and show them you can do anything you put your mind to, while addressing — what I saw as — a need," Douglas said. "Understanding the world around you from a child's perspective can help foster not only a scientific foundation in young minds, but will also encourage environmental responsibility."

"Itsy-Bitsy's Science Adventure" — published by FriesenPress in late 2018 — explores the day in a life of a spider who meets various creatures along his journey while learning about their biology, such as the differences between an arachnid, an amphibian and an insect. The book is available at outlets including online stores such as iTunes and Amazon.

The story isn't finished, Douglas said. The book is labeled as the first of the "Itsy-Bitsy Science Series," and Douglas already has plans for follow-up titles that continue to explore the spider's adventures in learning about science.

Douglas knows a thing or two about science. She works as an environmental health and safety project manager for Ontario-based Golder Associates, a global company that provides consulting, design and construction services.

Douglas said her interest in a STEM-based career began when she was an undergraduate at SVSU more than a decade ago.

"I have always been interested in science, though I was not planning to study science or pursue science as a career," said the Lexington, Michigan native whose maiden name is Jennifer Watson.

In 2003, she enrolled in a course taught by Richard Trdan, a longtime SVSU biology professor who retired a year before his death in 2018.

"He got me excited about science, and we — with our colleagues and classmates — ended up working together on various research projects for five years," Douglas said. "That eventually led me to a career in science."

Among her undergraduate projects at SVSU was research examining potential genetic weaknesses in zebra mussels that could aid in bioremediation efforts.

One year after graduating with a bachelor's degree in biology in 2007, she began her job at Golder Associates.

In 2010, she married SVSU alumnus Matt Douglas, who earned a bachelor's degree in marketing in 2007. They now reside in Ontario, where they are raising two children.

Jennifer Douglas, meanwhile, hopes her writing helps other parents raise their children to love science. Less than three months after its publication, "Itsy-Bitsy's Science Adventure" has sold about 400 copies, she said.

"My children — ages six and three — have heard the stories for years, so to have the book in hand has been very exciting for them," Douglas said. "They know the book was inspired by them, which they love."