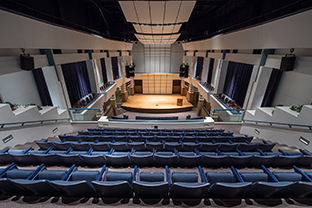 A performance inspired in part by a steampunk superhero comic book series will be on the program for a classical music concert scheduled this week at Saginaw Valley State University.

Musicians William Sutton and Ling Lo will perform Friday, Feb. 8, at 7:30 p.m. in SVSU’s Rhea Miller Recital Hall. The concert is free and open to the public.

The duo arrives at SVSU with résumés featuring both local and international accolades.

Sutton, who will be playing the euphonium alongside Lo’s piano performance Friday, won the Midwest Regional Tuba-Euphonium Conference’s euphonium solo competition in 2015. Sutton also advanced to the semifinal round four times at the Leonard Falcone International Euphonium and Tuba Festival. Sutton, an adjunct faculty member in SVSU’s Department of Music, has performed with groups such as the Grand Rapids Symphony Orchestra, Lansing Symphony Orchestra as well as the Orchestra of Northern New York.

As a soloist, Lo has performed in global competitions including the International Bohemia Metro Cup and Taiwan Cultural Cup Music Competition. She carries degrees in piano performance from both Boston University and Soochow University in Jiangsu, China. Lo is currently completing a Doctor of Musical Arts degree in piano performance and a Master of Music degree in collaborative piano from Michigan State University.

Friday’s performance will include selections such as “In League with Extraordinary Gentlemen,” a Peter Graham-composed musical piece inspired in part by a comic book series and 2003 film about a group of steampunk-themed superheroes known as The League of Extraordinary Gentlemen. Other musical selections planned for Friday include work from 19th century Austrian composer Franz Schubert and 20th century American composer William Grant Still.

For more information about Friday’s concert, contact the SVSU Department of Music at music@svsu.edu or (989) 964-4159.