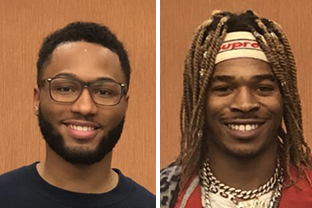 Two Saginaw Valley State University students’ enthusiasm for international diplomacy earned them an award at a recent conference and an opportunity to advance to international competition.

Model United Nations is an organization for students with an active interest in international affairs, policy and diplomacy. Through participation in simulations and regional/national conferences members gain valuable skills in research, communication, and conflict resolution.

Kone’ Bowman, a political science major from Pontiac, and Joseph Shepherd, a political science major from Harper Woods, won the award for Exceptional Representation for the General Assembly Third Committee as Sri Lanka. As part of the Third Committee, Bowman and Shepherd represented Sri Lanka on topics such as the promotion and protection of the rights of children and rights of indigenous peoples.

Stewart French, SVSU associate professor of political science and team adviser, said that winning the Exceptional Representation award was remarkable and speaks to the students' preparation.

“This is one of the larger committees, and accomplishing this with such a small country is quite impressive,” French said.

French said the university's Model U.N. club has cumulatively won over 40 awards in 12 years at national and international conferences.

The SVSU team will travel to Toronto in February to compete at the North American Model United Nations Conference.