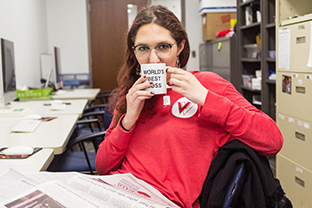 With a drive to keep a community informed and a talented way with words, Saginaw Valley State University senior Kaitlyn Farley earned a spot in a program designed to develop some of the nation’s top college journalists.

The Warren native was selected to the National Newspaper Association Foundation's News Fellows Program. The opportunity will send her to a paid-for community journalism workshop in Washington, D.C. from March 18-21.

“I’ve never flown before,” she said. “I’m excited about the whole experience.”

During the workshop, Farley and her peers will work with veteran journalists to develop skills that allow community newspaper reporters to pursue hot button issues impacting readers. Farley — a double major in history as well as professional and technical writing — also will learn more about reporting in politics as part of the National Newspaper Association Foundation program. It's an opportunity that will connect her with lawmakers and legislative staff working in Congress.

Jodi McFarland Friedman, the staff adviser for the SVSU student newspaper where Farley serves as editor-in-chief, said Farley's spirit of determination is reflected in the quality of journalism she produces.

“When a student is on fire for the free flow of information, speaking truth to power and journalism that shines a light on her campus, it shows,” said Friedman, the former editor of The Saginaw News. “These qualities shine in Kaitlyn Farley.”

A first-generation college student in her family, Farley during her freshman year began writing stories about SVSU-hosted musical performances for the student newspaper, The Valley Vanguard. It was her first-ever journalistic endeavor. Informed by her own experiences as a musician — she even played bassoon for a short time with the SVSU Concert Band — Farley approached each assignment with a desire to bring an expertise and authenticity to the publication’s coverage of musical performances.

“I knew the jargon for music, and so I liked bringing that kind of writing to The Vanguard,” she said.

Farley’s pursuit of authentic coverage helped elevate her from niche writer to newsroom leader. As a sophomore, she earned a spot as editor of the arts and entertainment section. By her junior year, she was named editor-in-chief, a role she retained as a senior.

With an ambition to diversify her reporter portfolio, Farley has ventured outside of music journalism. Her byline often has appeared on The Vanguard’s front page, sometimes attached to the publication’s most in-depth reporting about news items impacting her campus readers. Her growing savvy for investigative journalism inspired her to share those experiences with her staff, passing along lessons learned about reporting tactics including how best to file a Freedom of Information Act (FOIA) request.

“We know a lot more about journalism this year than we did last year,” she said of her staff of 23 students.

Farley’s fondness for the newsroom environment extends beyond her growing love of journalism. She said her staff’s camaraderie makes for a fun, relaxed atmosphere that offsets the seriousness sometimes associated with reporting. To lighten the mood, the group attends movies and visits cider mills together. In The Vanguard newsroom, Farley and her co-workers pause weekend production shifts to feed an office betta fish they named Gil Finley.

Friedman said she was impressed with Farley’s ability to excel as both a journalist and a leader — all while seeking a university education.

“Having been a first-generation college student myself, I can relate to the drive, passion and self-direction that pursuing a college degree in those circumstances requires,” Friedman said.

“Kaitlyn’s college career is self-financed through well-earned scholarships and many side jobs. She juggles the demands of multiple employers, a full course load and The Vanguard with aplomb. It isn’t, but she makes it look easy.”

The 2020 winter semester will be Farley’s last at The Vanguard and SVSU. She anticipates earning her bachelor’s degree in May. She recently accepted a reporter internship position with The Saginaw News/MLive for next summer. She plans eventually to chase a full-time job in journalism or another industry that could benefit from her writing skills and leadership abilities.