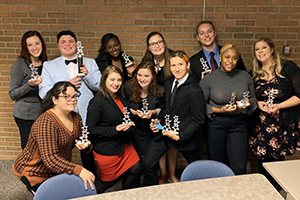 The Saginaw Valley State University forensics team won first place at the fall Michigan Intercollegiate Speech League Tournament on Saturday, Dec. 7. This is the first time SVSU has hosted or won this tournament.

“We could not have been successful without the hard work of each and every student," said Ryan Rigda, co-adviser of the SVSU team and a lecturer of communications.

"This was largely a team effort and demonstrates the start of a very promising future for the SVSU forensics team."

As a result of their performance at the SVSU-based tournament, six SVSU students qualified to compete in the National Forensics Association Championship Tournament, which will be hosted by University of Wisconsin-Whitewater in April. Those students and their Dec. 7 tournament performances are as follows:

Four additional students — who earned invitations to the national championship as a result of their performance at a September tournament — also earned top awards at the Dec. 7 contest. Those students and their Dec. 7 tournament performances are as follows:

In total, 11 SVSU students are qualified to participate in the April national championship. Monae Colvin, a criminal justice major from Detroit, qualified after a strong showing during the September tournament.

The next tournament the SVSU forensics team will compete in is at Northwood University in February.

Amy Pierce, an SVSU associate professor of communication, serves as co-adviser for the forensics group along with Rigda.