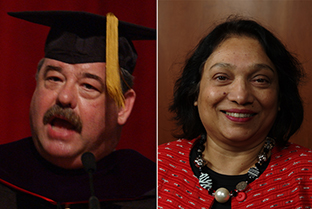 “We would like to thank Governor Whitmer for her thoughtful appointments of these two fine individuals who have strong ties to SVSU and histories of public service,” said Donald Bachand, SVSU president. “We welcome them as they serve SVSU and the State of Michigan in this vital volunteer capacity.”

“As lieutenant governor, John Cherry chaired the Michigan Commission on Higher Education that provided a road map for improving our state's future by increasing educational attainment,” Bachand said. “He served as our Commencement speaker in May 2004 and received an Honorary Doctor of Laws degree. We welcome his advocacy for public higher education and his career of public service to our Board.”

“Raj Wiener is a shining example of the career success and community service SVSU alumni achieve,” Bachand said. “She is a past recipient of our Distinguished Alumni award, and her career includes service to our state as director of the Michigan Department of Public Health. She has remained active with SVSU through her service on the board of the SVSU Foundation.”

Cherry and Weiner replace Scott Carmona and Jenee Velasquez, who completed their eight-year terms on the SVSU Board of Control.