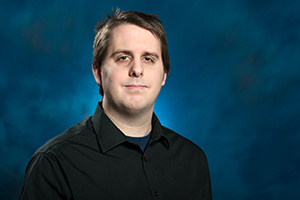 A Saginaw Valley State University student inspired to compose a musical theme for a superhero movie will see his work played by the SVSU concert band next week.

Nathan Grocholski's work, titled “Dark Fire,” will be one of several musical pieces performed at the band's spring concert Wednesday, April 17, at 7:30 p.m. in SVSU's Malcolm Field Theatre for Performing Arts. The event is free and open to the public.

Grocholski, a music major from Grand Rapids who also plays clarinet in the band, said he began creating “Dark Fire” for a musical composition class and later updated it when there was an opportunity to include it in the spring concert.

“I was watching movies without scores to them, and the first one that I came across was the 2012 found-footage superhero film ‘Chronicle,’” Grocholski said. “This piece is based off of common superhero themes like in ‘Avengers,’ and I was trying to capture a darker superhero theme that was in contrast to more light-hearted movies and their motifs.”

Although some of his original works have been performed in smaller ensembles before, this is his first large ensemble piece to be performed during a public performance.

“This is probably the most monumental moment in my career,” Grocholski said. “It has truly been an honor to work with such talented musicians here at SVSU. I feel strongly that my fellow band mates and instructors have put much care into my work and are always willing to share constructive feedback with me.”

Led by conductor and assistant professor of music Norman Wika, the band will be performing selections from the 20th and 21st centuries.

For more information on SVSU's Department of Music, visit svsu.edu/music.