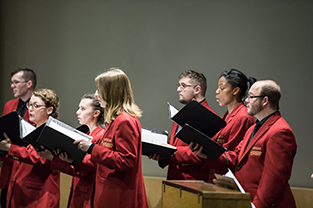 An ensemble featuring 49 performers from both SVSU's Concert Choir and Cardinal Singers will present the concert — titled "The Food of Love" — Monday, April 15, at 7:30 p.m. in the university's Rhea Miller Recital Hall. The event is free and open to the public.

"The Food of Love" largely will feature music with lyrics taken from Shakespeare works such as "As You Like It," "The Merchant of Venice," "A Midsummer Night's Dream," "The Tempest" and "Twelfth Night." The program also will include performances of “The Red, Blue and White” by musician Scott Tuttle as well as “Beatus Vir" by 16th-century Italian composer Claudio Monteverdi.

The concert's vocalists will be directed by Kevin Simons, SVSU associate professor of music.

Amanda Stamper will serve as a piano and harpsichord accompanist while Susan Mercy of the Midland Symphony Orchestra and Emily Kinnicutt will play violin.

For more information about the event, contact the SVSU Department of Music at 989-964-4159 or visit svsu.edu/music.