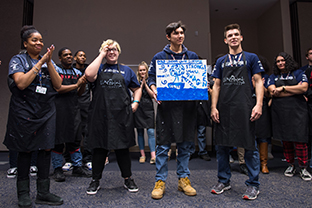 A national publication again has recognized Saginaw Valley State University for its commitment to diversity and inclusion.

INSIGHT Into Diversity magazine, the oldest and largest diversity-focused publication in higher education, selected SVSU as a recipient of the 2018 Higher Education Excellence in Diversity (HEED) Award.

SVSU will be among the 95 institutions featured in the November 2018 issue focusing on HEED Award recipients. SVSU first earned the distinction from INSIGHT Into Diversity in 2016.

Lenore Pearlstein, publisher of INSIGHT Into Diversity magazine, said SVSU was chosen for “showing an exceptional commitment to recruiting and retaining students and employees through their unique programming and initiatives.”

“Their strategic plan includes recognizing their many goals as they move forward over the next several years, and we hope being the recipient of such a prestigious national award will help the campus to be impactful and intentional in their efforts,” she said.

Donald Bachand, SVSU president, said he was pleased to learn SVSU was being recognized with the HEED Award.

“SVSU prides itself on creating an environment that empowers the diverse population of our campus, as well as our surrounding communities,” he said.

Mamie T. Thorns, SVSU's special assistant to the president for Diversity Programs, said one of the university's top priorities involves fostering inclusive dialogues that make room for every voice to be heard.

“Every race, every nationality, every gender, every sexual orientation, every religion, and everybody has a place on our campus,” she said. “This would not be possible without our students, faculty, staff and administration, who work so hard so that we can meet our standards for diversity and inclusion.”

Among the new initiatives SVSU pursued recently included an expansion of the university's diverse scholarship and financial aid offerings. The initiative – supported in part financially by private donors, alumni and community partners – paved the way for more students than ever qualifying for aid at SVSU.

Pearlstein said selecting HEED Award recipients involved a comprehensive and rigorous application process that included questions relating to the recruitment and retention of students and employees - and best practices for both - continued leadership support for diversity, and other aspects of campus diversity and inclusion.

“We take a detailed approach to reviewing each application in deciding who will be named a HEED Award recipient,” she said. “Our standards are high, and we look for institutions where diversity and inclusion are woven into the work being accomplished every day across their campus.”