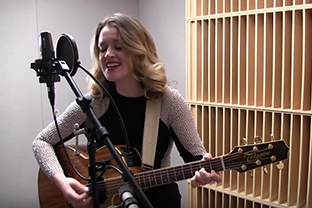 Saginaw Valley State University alumna Madalyn McHugh has taken her talent and determination to New York City, where she has landed an internship with the Open Jar Institute, a program that provides learning opportunities for aspiring actors.

McHugh was selected to be part of this year's Open Jar Institute through a highly competitive nationwide selection process. At the institute, she participates in workshops and auditions for national tours for both off-Broadway and Broadway productions.

“Madalyn was a curious and extremely hard-working student,” Simons said.. “Her work ethic was an example to those around her. She took advantage of every opportunity to get involved and perform both on and off-campus.”

A Caro native who graduated from SVSU in December 2017 with a bachelor's degree in music, McHugh was highly engaged while a student. She participated in the Kennedy Center American College Theater Festival, and as a vocalist, she was a member of two ensembles, Cardinal Singers and SVSU's Concert Choir, where she was a section leader.

From her auditions through the Open Jar Institute, McHugh has been called back for the production of “My Fair Lady,” along with participating in classes with nationally-known choreographer James Gray and Broadway director Susan Stroman.

McHugh recalled how Simons took her aside to talk to her about her career aspirations.

“My goal was Broadway,” she said. “I specifically said that to him, and he said, ‘OK, kiddo. Let’s get you there.’”

McHugh talks about her SVSU experience – including how Simons helped prepare her for Broadway – in a “Cardinal Close Up” video available at https://youtu.be/Ly8veF3MtLA.