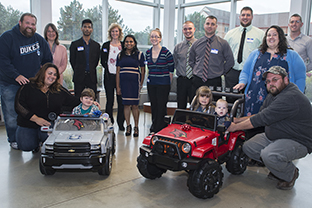 After two brain surgeries and one spinal surgery, 20-month-old Joey Stagray has yet to take his first steps. Diagnosed with spinal bifida, he often watches while his 4-year-old sister runs, jumps and plays across their Sterling farm.

But family members say Joey soon could keep pace with his active sibling thanks to the support of Saginaw Valley State University students determined to help him move despite his physical limitations.

Joey and another child with physical disabilities – 4-year-old Finn Edmonds, of Bay City – will take home ride-on toy vehicles modified for their specific physical needs by SVSU computer science, electrical engineering and mechanical engineering students. The mini-vehicles will be given to the families during a gathering Friday, Oct. 12, at 5 p.m. on the first-floor lobby of SVSU's Pioneer Hall.

The occasion will cap off a nearly year-long effort by two groups of SVSU students and one professor determined to help Finn and Joey achieve a form of locomotion using toys built to also bring them joy.

“I sobbed like a baby when I first saw what the students were building,” said Sarah Stagray, Joey's mother. “SVSU has been so kind to us, and we appreciate it greatly.”

The project began with SVSU's Robotics Club, which participated in the annual NASA Robotics Mining Competition at the Kennedy Space Center during the 2017-18 academic year. The contest tasks attendees with participating in projects that involve bettering their communities.

Waliul Matin, an electrical engineering major from Bangladesh who studied at Royal Oak High School and is an SVSU Robotics Club member, was enticed by the “GoBabyGo” concept.

“This is one of the joys of engineering: seeing other people benefit from your work,” Matin said. “And it's been a huge learning experience for everyone involved.”

Cavelry also connected the Robotics Club with a child to support: Finn. The 4-year-old was diagnosed with hydrocephalus – a buildup of fluids in the brain – which led to him developing other disabilities such as aqueduct stenosis and spastic quadriplegic cerebral palsy that affect his ability to move.

Under the guidance of Rajani Muraleedharan, the Robotics Club adviser and an SVSU associate professor of electrical and computer engineering, students began a nearly year-long effort to build a ride-on toy car Finn could operate despite his physical limitations.

First, they met with Finn and his parents, Kelley and Brent Edmonds, to shop for the vehicle from Toys 'R Us in December 2017. They selected a police-themed ride-on toy car since both of Finn's grandfathers were retired law enforcement officers.

The project expanded beyond Finn when a group of SVSU electrical engineering students not associated with the Robotics Club decided to adopt the initiative as part of their capstone senior project. Muraleedharan served as their adviser. Cavelry suggested another child – Joey – who would benefit from the students' help.

“If we are successful with this and begin to build more vehicles for more children, we are thinking we might be able to bring the children together for play dates,” Muraleedharan said. “We are trying to build a community where children with special needs explore independence and broaden inclusion for all the children in the society. SVSU's 'GoBabyGo' project impacts not only the field of engineering, but it's about the community too.”

Don Horner, an electrical engineering major working on Joey's vehicle, said the project's importance extended beyond the academic merits for him.

“I was interested in this project because I have three kids of my own, so I could relate to that,” the Bay City resident said. “I wanted to help Joey and his family. This is a great program that really gives back to the community.”

Victoria Anglin, a mechanical engineering major from Millersburg, near Rogers City, has been working on Finn's vehicle. She met Finn and his family several times to consult on the modifications being built.

“I loved seeing the look on his face when he first was able to see it,” Anglin said. “He was super excited. That made it worth the work.”

Kevin Horn, an electrical engineering major from Frankenmuth, said he has worked an average of 20 hours per week modifying Joey's vehicle since the semester began, including spending Saturdays and Sundays in SVSU’s engineering labs.

“I worked last week trying to find a solution to a problem that I ended up solving using one pin,” he said. “This is going to provide sustained enjoyment for the kids that should last them five years, so we want to get it right.”

Joey and his family visited SVSU earlier this month so students could make final modifications based on his growing physical frame. While he isn't old enough to navigate the vehicle on his own, students included a remote-operated component, which allowed his parents to drive it using a remote control.

During their recent visit, Joey's 4-year-old sister, Gabby, took the wheel and drove a few feet as her brother watched with delight from his mother's arms. When Gabby brought the toy car to a stop nearby, he stretched out his arms in her direction.