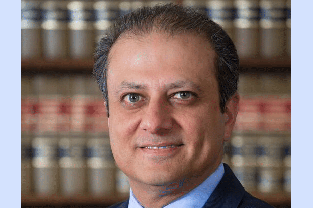 Saginaw Valley State University is hosting a lecture by a nationally recognized attorney, who earned a reputation as one of “the nation's most aggressive and outspoken prosecutors,” according to The New York Times.

“An Evening with Preet Bharara” will feature the attorney in a moderated discussion Thursday, Nov. 1 at 7 p.m. in the Curtiss Hall banquet rooms at SVSU. The event is free and open to the public. Peter Rose-Barry, SVSU's Finkbeiner Endowed Professor of Ethics, will lead the moderated discussion.

Bharara served as U.S. attorney for the Southern District of New York court from 2009-17. He was nominated by President Barack Obama in 2009. Bharara was unanimously confirmed by the U.S. Senate later that year.

While a federal prosecutor, the office secured convictions of numerous insider trading defendants. The Civil Frauds Unit brought a number of significant civil actions alleging financial and health care fraud and collected hundreds of millions of dollars in settlements, including from Deutsche Bank, CitiMortgage, and Bank of America for fraud relating to faulty lending practices.

Under Bharara’s supervision, the office brought a series of significant and systemically revelatory public corruption cases against members of New York City and State governments. .

In 2012, Bharara was featured on the cover of TIME magazine, and appeared on its list of the “100 Most Influential People in the World.” He has been profiled in publications such as Bloomberg Markets, The New York Observer and Vanity Fair.

Bharara's appearance at SVSU is part of the university's annual Beutler Forum as well as its 2018-19 Dow Visiting Scholars and Artists Series.