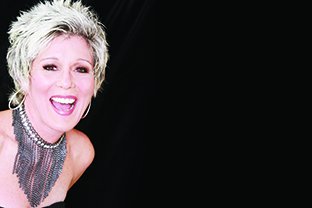 Saginaw Valley State University will host a concert featuring a Grammy winner and a musician lauded by the Chicago Tribune as “the best Gershwin pianist in the country.” Kevin Cole and Sylvia McNair will perform together Friday, Nov. 16 at 7:30 p.m. in the Rhea Miller Recital Hall.

Listen to a radio interview with Kevin Simons, SVSU associate professor of music.

Cole, SVSU’s visiting artist in musical theatre, is internationally recognized for being the leading expert in the music of the late pianist and composer George Gershwin. Cole has played with symphonies all over the world, earning himself the title of "America's pianist."

A Bay City native, Cole is a veteran of SVSU's stage, having performed numerous times for the SVSU community, as well as in venues throughout the Great Lakes Bay Region. This will be Cole's comeback performance at SVSU after surviving major brain surgery last March.

McNair, an American opera singer and two-time Grammy award winner, will be performing alongside Cole. During her three-decade career, she has been featured on the cover of Opera News Magazine countless times and has performed as a soloist multiple times with nearly every major opera company and symphony orchestra in the world. McNair spans the musical realms of opera, oratorio, cabaret, and musical theater, and she has performed with many well-known musicians, including the late Aretha Franklin.

The concert – part of SVSU’s Rhea Miller Concert Series – is free of charge, which is rather extraordinary, said Kevin Simons, SVSU associate professor of music.

“We don't get to hear from artists such as Sylvia McNair every day,” he said. “Then to have it for free and in our own fantastic recital hall is a great opportunity,” Simons said.

In addition to her concert Friday night, McNair will spend the week working with SVSU music students; four students will join her for a master class performance Wednesday evening.

“She and Kevin are friends. When we brought Kevin on staff as our guest artist, he said, ‘What if I brought Sylvia in?’ I said, ‘Yeah, I think we could do that. That would be great.’”

Cole and McNair have performed together numerous times, including in October for concerts in Thousand Oaks and Oxnard, California. Tickets for those shows ranged from $34 to $124 per person.