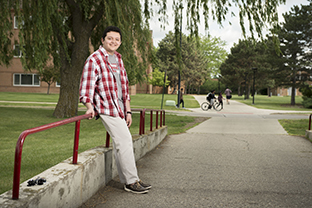 A Saginaw Valley State University student recognized for his leadership and passion for bettering SVSU students’ life on campus has added another national award to his résumé.

Pedro Marin, a marketing major from Grand Blanc, earned the Student of the Year award from the National Association of College and University Residence Halls (NACURH) during its annual conference May 25-28 at Arizona State University in Tempe. NACURH is an organization for student leaders in college campus housing operations.

“This was completely unexpected, because there were so many great people who are doing great things for their campuses across the country,” he said. “I thought my chances were pretty up in the air. It's just me doing the things I love to do.”

He qualified for the national award after receiving recognition from one of the organization's regional affiliates in November 2017. Because of another commitment, he was not in attendance last week when his name was announced as the recipient.

Marin, named National First Year Student of the Month in August 2014 by NACURH following his freshman year, plans to pursue a professional career in student affairs at the higher education level. It's a passion he picked up early on at SVSU.

“When I was a freshman, I knew I wanted to work with people to spread positivity and inspire movement and education for others, but I didn't know how I wanted to do that,” he said.

He discovered the “how” after taking on leadership roles in SVSU's Residential Life community and receiving inspiration from his first campus mentor, Merry Jo Brandimore, a longtime SVSU student affairs administrator who retired in 2016.

“She really introduced me to this profession as a possibility, and I fell in love with it,” Marin said.

Brandimore's successor, Sidney Childs, is now serving as Marin's mentor in an official capacity that landed Marin a paid summer internship across the country.

Childs, SVSU associate provost for Student Affairs and dean of students, became Marin's adviser in October 2017 as part of Marin's acceptance into the NASPA Undergraduate Fellowship Program for the Student Affairs Professionals in Higher Education. Marin joined about 200 individuals in the national program offering opportunities for scholarships, on-campus mentorship and professional development events to students from underrepresented and historically disenfranchised populations.

Through that opportunity, Marin accepted a paid internship at the University of Colorado-Boulder. He will work with the campus' student affairs services including its career services and diversity programs. Marin departed for the job Wednesday, May 30, and returns in mid-July.

“I'm so appreciative of all the ways SVSU, NACURH and NASPA has allowed me to grow,” he said. “I've had so many great opportunities.”

Marin has received several SVSU awards recognizing him for his work as a resident assistant. Outside of campus, he is a regular participant in the SVSU Alternative Breaks programs that send students to help nonprofit organizations and charities across the nation during the holiday and spring break periods.

Marin plans to graduate from SVSU in May 2019, then pursue a postgraduate degree in student affairs leadership.