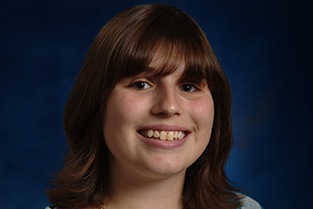 A Saginaw Valley State University student has been honored for the care and concern she shows for her fellow students in helping them learn to write more effectively.

Sara Houser, an elementary education major from Carrollton and a tutor in SVSU’s Writing Center, received the Outstanding Tutor of the Year award from the East Central Writing Centers Association.

The association represents 100 writing centers - where students mentor their peers on writing assignments - across five states in the Midwest and selects one outstanding tutor each year.

“Sara has the ability to be warm, engaging, and genuine while asking probing questions, offering counterarguments and providing insights that make the writers re-think, re-focus and even re-imagine their original work,” said Helen Raica-Klotz, director of the SVSU Writing Center.

Raica-Klotz has seen Houser’s strong work ethic firsthand, saying Houser has tutored hundreds of writers between her work at SVSU and in community writing centers in Bay City and Saginaw that serve the public. Beyond tutoring, Houser edits and writes for the publication Writing@SVSU, which displays a variety of writing pieces from SVSU students.

For Houser, tutoring is much more than helping a student achieve a higher grade.

“Just to get someone an ‘A’ on a paper is not good enough, you have to be willing to go the extra mile,” she said.

In addition to her degree, Houser is working to achieve an endorsement to teach English as a second language.