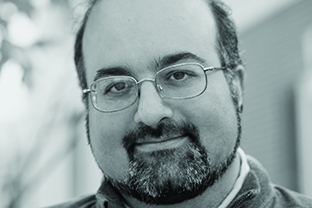 Saginaw Valley State University will host one of the leading scholars of contemporary Islamic thought and Islamic spirituality for a public lecture. Omid Safi, director of the Duke Islamic Studies Center, will speak Wednesday, March 28 at 6:30 p.m. in Curtiss Hall Banquet Room A.

A leading Muslim public intellectual, Safi has been among the most frequently sought speakers on Islam in popular media, appearing frequently in the New York Times, Newsweek, Washington Post, and on PBS, NPR, NBC, BBC, CNN, and international media.

A professor of Islamic Studies at Duke University, where he completed his Ph.D., Safi has served on the board of the Pluralism project at Harvard University and is the co-chair of the steering committee for the Study of Islam and the Islamic Mysticism Group at the American Academy of Religion, the largest international organization devoted to the academic study of religion. Committed to the intersection of love and justice, he was recently invited by the family of Martin Luther King to speak from Ebenezer Church in Atlanta during the 49th annual commemoration for Dr. King.

At SVSU, Safi’s lecture is titled, “Teachings of Rumi for Today's World.” The great 13th century Sufi mystic Rumi has become a best-selling poet in the English language, and people in his native Persia, as well as in Turkey, South Asia, and now Europe and America turn to him for inspiration and spiritual guidance.

Safi's talk will offer an in-depth dive into the ocean of divine love that animates Rumi, his poetry and teachings. The presentation will explore his astonishing love poetry, his unforgettable life stories and the legacies that are connected to him with an eye toward what these teachings have to say to us today. At a time that so many people are running ragged and find themselves overwhelmed, what do the love mystics of this tradition have to offer today, here and now?

The lecture is open to the public. Admission is free of charge. A reception and book signing will follow the lecture.

The Raana Akbar Memorial Lecture on Islam and Culture was established in 2011 by Dr. Waheed Akbar in memory of his wife Raana, a former member of the SVSU Board of Control, physician and community leader.

The William and Julia Edwards Lecture in Philosophy and Religion is a forum where recognized scholars in religion and philosophy are invited to share their work with the campus community.

The Dow Visiting Scholars and Artists program was established through an endowment from The Herbert H. and Grace A. Dow Foundation to enrich our regional cultural and intellectual opportunities