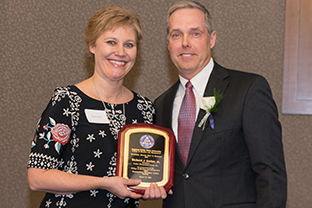 Recipients of the business and alumni awards were chosen by an advisory board for SVSU's College of Business & Management. The faculty award honorees were selected by SVSU students.

The recipients of the business awards include the following:

•                     Rowleys Wholesale earned the Outstanding Family Business Award, which is given to a family-owned company that demonstrates a commitment to community-minded business practices. The Bay City-based business distributes automotive equipment such as tires and car wash chemicals.

•                     Dick Garber, president of Garber Management Group, received the Outstanding Business Leader award, presented to an individual whose interests and actions contribute to the cultural and economic growth of the region. Garber is a third-generation owner of the company, with operations that include automotive dealerships in four states as well as the Saginaw Spirit hockey franchise.

•                     The Outstanding Entrepreneur Award was presented both to Al Thieme, founder and chairman of Amigo Mobility International, and Beth Thieme, vice president and chief executive officer of the company. The award honors individuals whose successes include both sales as well as support for the surrounding community. The Bridgeport Township-based business produces mobility scooters that better the lives of individuals with physical disabilities.

The SVSU faculty members recognized at the ceremony include the following:

•                     Amy Hendrickson, assistant professor of law, who received the Excellence in Teaching for Full-Time Faculty Award

Alumni recognized at the event include the following:

SVSU's College of Business and Management is among the 5 percent of business schools worldwide who are accredited by AACSB International; this is widely considered to be the gold standard for business school accreditation.