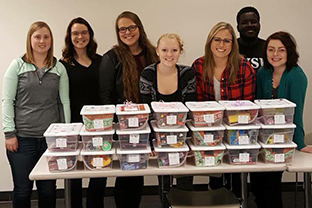 For Dan Kennihan, membership to Saginaw Valley State University's National Society of Collegiate Scholars (NSCS) chapter means an experience sure to expand the mind and enrich the community.

Kennihan is the latest president of the SVSU student organization with a membership that prides itself on participating in community-minded service projects. The biology major from Mason said the experience is humbling.

"You hand out food to people in need on a Saturday, but then you get to go home to your house, with your warmth or your air conditioning," he said. "For me, it puts it in perspective how easy it is to make a difference."

Kennihan and his fellow members recently were recognized for the difference they members make in the the lives of others across the Great Lakes Bay Region.

The SVSU group received the Gold Star Chapter award from the NCSC’s national office. The status is a distinction earned by some of the 320 chapters nationwide that best demonstrate excellence in engaging, student-centered community service projects.

SVSU’s chapter in recent months participated in initiatives benefiting organizations such as Relay for Life, the Saginaw Children's Zoo, and The Jared Box Project.

Hali Motley, the previous chapter president for SVSU’s group, said the community engagement provides an enriching experience. She was particularly moved by her work with The Jared Box Project, a nonprofit that provides boxes of toys to children admitted to hospitals.

“Jared Box Project is important to us as a chapter because we — as college students — know how important it is to work hard and play even harder,” said Motley, a Birch Run native who received a bachelor's degree in international business in May.

“We wanted a chance to give back to the kids in our community — who are stuck in the hospital during the holiday season — to give them more chances to play while they were working hard on getting better.”

Kennihan said his involvement in the SVSU chapter’s work continues to provide him with a sense of community with his fellow members.

“We are all working toward the same goal of giving back to the community,” Kennihan said.