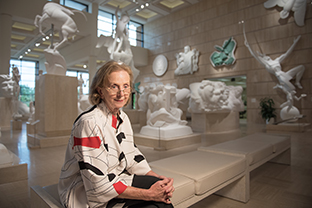 For 12 years, Marilyn Wheaton has contributed to the growing legacy of Marshall M. Fredericks, the late sculptor (1908-1998) whose iconic works include The Spirit of Detroit as well as the Cleveland War Memorial Fountain of Eternal Life.

Now Wheaton is preparing to transfer that responsibility to the hands of her successor. In December, she will retire as director of the Marshall M. Fredericks Sculpture Museum housed on Saginaw Valley State University’s campus. A national search for a new director will soon be underway.

“I have accomplished everything I wanted to accomplish here, and more,” Wheaton said. “There’s a big, wonderful world of art that I still want to be part of in some way, but I feel like I have done everything I can do here. It’s time for someone new to step in.”

Since her hiring as director in 2006, Wheaton has overseen a considerable expansion of the museum’s offerings, a substantial growth in attendance and a strategic outreach aimed at increasing community engagement with the facility. Her advocacy of Fredericks’s legacy has reached far beyond the walls of the museum bearing his name.

“Marilyn has worked tirelessly to promote both Marshall Fredericks’s museum and his life’s work,” said Don Bachand, SVSU’s president. “The museum is a cultural gem in our community and a wonder of art in the eyes of the visitors who travel here from all across the world to see it. Without Marilyn, Fredericks' work may not have the audience it deserves.”

Bachand was one of the officials who recruited and hired Wheaton a dozen years ago to lead the Marshall M. Frederick Sculpture Museum, which first opened on SVSU’s campus in May 1988. Wheaton was charged with developing the relatively-young gallery into a mature institution with a firm footing in the community arts scene. If attendance numbers are any indication, she succeeded in that goal. Before Wheaton was named director, about 10,000 people visited annually. Within a decade, the museum counted a record 18,000 visitors in a single year.

A number of factors contributed to the growth, Wheaton said, including the following:

One of Wheaton’s proudest accomplishments at the museum now stands 12 feet tall in that garden, a symbolic representation of her dedication to preserving Fredericks’ legacy. Black Elk: Homage to the Great Spirit was the artist’s last sculpture, commissioned for installation at a bank in Southfield.  Fredericks died in 1998 before the sculpture came back to Michigan from the East Coast foundry and the owner had moved to California. Instead of being displayed publicly, Black Elk was mothballed in a warehouse.

Fifteen years later, though, Wheaton brought Fredericks’s last commissioned piece to life. She tracked down the owner and secured a loan agreement with him so that Black Elk could be installed as the crown jewel of the new Jo Anne and Donald Petersen Sculpture Garden.

Konnie Gill, chairperson for the Marshall M. Fredericks Sculpture Museum Board of Advisors, said Wheaton’s dedication to the late sculptor’s works is unmatched.

“I’ve been a member of many boards over the years, and I’ve never met a director — of any type of nonprofit — who has given their life to their job in the way Marilyn has,” said Gill, the former director of McLaren Bay Medical Foundation who now owns a physician recruitment business.

“Marilyn is the most devoted person I have ever met. Her love for the Fredericks family, for Marshall’s work, for SVSU — she is the epitome of who anyone would want as a director … or an employee, for that matter.

Wheaton’s relationship with Fredericks extends beyond her familiarity with his sculptures. She knew the man. Before her arrival at SVSU, Wheaton was immersed in the Detroit arts scene where she met Fredericks in his Royal Oak studio.

A native of small-town Silex, Missouri, Wheaton first arrived in Michigan in the late 1960s in part because her devout Roman-Catholic parents urged her to attend a Catholic institution for college. She chose Madonna University in Livonia. Not long after graduating with a bachelor’s degree in history, she landed a job as a research assistant at the Detroit Institute of Arts in the Smithsonian Institution’s Archives of American Art.

Her exposure to the arts during her 11 years there inspired her to remain in the industry. Later, she spent eight years as director of the City of Detroit’s Cultural Affairs Department and 11 years leading Michigan’s first statewide arts advocacy organization, Concerned Citizens for the Arts in Michigan.

Her 12 years spent as director of the Marshall M. Fredericks Sculpture Museum represents her longest tenure in any one role. Despite her work over that time, there is plenty of room for growth and development at the museum, she said, so long as her successor possesses both an artistic vision and a strong sense of community.

“You must be a people person who understands the importance of making connections with the people you serve and the people who can help you,” she said. “And you cannot successfully run a museum if you can’t see two years down the road. You can’t exist here without a strategic plan that provides that sort of long-term direction.”

Wheaton’s long-term plans reside outside of the Great Lakes Bay Region. She and her husband never sold their home in Detroit, where she plans to return full-time when she steps down as museum director at the end of December.

“I’m not leaving here to go to another job, but I’m confident there will be other opportunities that present themselves to me there,” she said. “I will be part of the Detroit arts community in some way. But I will miss my staff and all of the friends I’ve met here.”