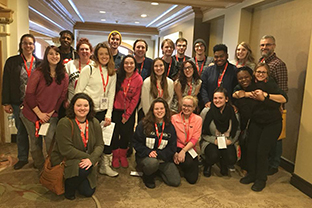 Saginaw Valley State University students performed their way to achieve a number of "firsts" for the university at the Kennedy Center American College Theatre Festival for Region III Jan. 9-14 in Indianapolis.

“This was one of our strongest showings we have ever had,” said Ric Roberts, SVSU professor of theatre. “We hope to have continued success with the Kennedy Center moving forward.”

The event includes colleges and universities from Michigan, Indiana, Illinois, and Wisconsin; 20 SVSU students were among the 1,400 who attended the festival.

For the first time, three SVSU students advanced to the semi-finals for the Irene Ryan Acting Scholarship Auditions, a feat which has not been achieved in the 19 consecutive years that SVSU has participated in this festival.  Abigail Burgess, a theatre major from Commerce Township; Brianne Dolney, a political science major from Bay City; and Donte Green, a Detroit native who graduated from SVSU with a bachelor's degree in theatre in December; each were judged among the top 45 actors at the festival.

Madalyn McHugh, a Caro native who graduated from SVSU in December with a bachelor's degree in music, followed suit, as she made it to finals for the Musical Theatre Intensive portion of the festival. This marked the first time SVSU was represented in that category.

Jessica Hurley, a theatre major from Essexville, impressed the judges, as well. Out of the 125 actresses that auditioned for a part in a two-woman show, she was chosen to play one of the two characters during the 10-minute performance at the festival.

Hurley said the event is about much more than recognition.

"The festival is a fantastic opportunity to gain new knowledge, experience and contacts in the theatrical field," she said.

Three other SVSU students captured honors, as well. Amber Tanner, a business major from Hemlock, advanced to the finals of the sound design competition. Zachery Wood, a theatre major from Flushing, was awarded honorable mention in the dramaturgy category, which involves the theory and practice of dramatic composition.  Jennifer Lothian, a communication and theater education major from Linwood, was selected to present her costume designs at the costume parade event.

A previous SVSU award-winner was invited to return. Last year, Bay City native Jacob Kaufman won the first-ever Region III Arts Management Fellowship and earned an invitation to the national Kennedy Center American College Theatre Festival. Because of this achievement, Kaufman was asked to return to run the registration desk for the 2018 festival.