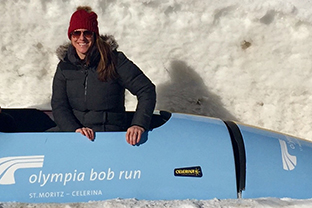 Michelle Knous has never forgotten the excitement in her father's voice when she called to tell him she qualified for the 2010 U.S. Winter Olympics women's bobsled team. She was in a hotel in St. Moritz, Switzerland that January, hours after her determined performance during an international bobsled competition helped a selection committee decide she should represent her nation one month later during the Winter Olympics in Vancouver.

"I ended up losing my dad in 2011, so I was happy I was able to share that excitement with him," Knous said.

That shared elation was one of the memories that came flooding back to Knous this month when she returned for the first time to that same St. Moritz hotel, this time as a member of the selection committee charged with choosing the men's and women's bobsled teams that will compete at the Winter Olympics games in PyeongChang, South Korea in February.

"It's been kind of eerie, how I'm back here like this," said Knous, a clinical coordinator for exercise science students at Saginaw Valley State University.

"Really, it's like nothing's changed. So much of it feels the same, even at the hotel. The same guy who served me pizza eight years ago is still here, telling the same jokes."

Knous and the selection committee spent the weekend watching Americans compete in the international bobsled circuit where she once excelled. The athletes who will represent the U.S. this year were announced Monday, Jan. 15. (Selections posted at https://www.teamusa.org/USA-Bobsled-Skeleton-Federation.)

While this time she won't face the pressures of competition, she said there is a different sense of urgency — and a consequential duty — involved in picking the best representatives of her country in her sport.

"The truth is, there are some athletes whose Olympic journey will end here," Knous said. "It's a lot of responsibility, but I am honored to be a part of the Olympic team selections. It feels great to give back to the sport that gave me so many memories of a lifetime."

For Knous, those memories included earning a spot as a pusher for the top U.S. women's bobsled team in the 2010 games, where she and her teammate, Shauna Rohbock, finished sixth in the world.

Her story as one of the world's best bobsledders began on a pole vault track. As a member of Michigan State University's track and field team in the mid-2000s, Knous — then Michelle Rzepka — impressed bobsled team recruiters with her athleticism as a pole vaulter. And she welcomed the new challenge.

For two years, Knous, a Novi native, trained at the Olympic Village camp in Lake Placid, New York while competing on the international bobsled circuit. By January 2010 in St. Moritz, where the U.S. selection committee was set to finalize the Winter Olympics bobsled team, Knous already was considered a frontrunner.

"When the team was announced officially, I still had tears in my eyes," she said. "Just hearing my name and knowing it was final — that it was real — was a powerful moment."

Immediately, she called her parents, David and Holly Rzepka, to share the news. They already were planning their trip to watch their daughter in Vancouver.

Having finished her duties, Knous is set to return to the U.S. on Tuesday. Next month, she will watch the teams she selected compete on a TV set in the comfort of her Freeland home beside the family she built after her bobsled career: her husband, Jeremy Knous, an associate professor of kinesiology at SVSU; and their two sons, Barrett and Drake.

"I have a joke I like to tell people," she said, "that I never won in the Olympics, but that's OK, because they are my three gold medals."