SVSU housing ranked No. 2 in the nation among public universities 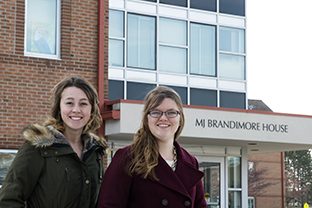 Saginaw Valley State University has been nationally recognized for its welcoming, friendly and fun residential community.

The website Niche has ranked SVSU’s residential facilities No. 2 in the U.S. among the 512 public universities included in their annual “Best Dorms” rankings.

“For me, SVSU's different housing options give students more independence on campus that make you feel at home,” said Lindsey Briolat, a health science major from Ubly.

SVSU rose one spot in the overall rankings to No. 18 nationally, out of the 1,411 four-year colleges and universities that were evaluated. Niche calculates their rankings using a weighted formula where 70 percent of a school's score comes from students' satisfaction with their housing, as well as data from the U.S. Department of Education.

Now a senior, Briolat has lived on campus since her freshman year. She said she has stayed on campus because of the inclusive atmosphere.

“SVSU creates a family,” she said. “The way our university connects with its students just makes us feel at home."

For Hannah Waslusky, an accounting major from Breckenridge, living on SVSU's campus has brought her more than just friends; it gave her a community.

Waslusky said that the close-knit living quarters during her freshman year gave her ample opportunities to make friends. She knew that all it took to find someone to hang out with was a shout across the courtyard.

“Some of the best friends I ever made started that way,” Waslusky said.

Waslusky has lived on campus for the three years that she has attended SVSU. She came for the convenience of living on campus, but stayed for the quiet and personal environment SVSU's housing offers.

“My apartment is set right in the middle of nature,” she said. “I get to see deer and bunny rabbits hop by my apartment every day. I couldn't imagine a better place to live.”

More than 2,400 students currently live on SVSU’s campus. Four the past nine years, at least 70 percent of the freshman class has chosen to live in SVSU’s residence halls.

To view the “Best Dorms” list, go to https://colleges.niche.com/rankings/best-college-dorms/.