A murderous comedy takes the stage at SVSU 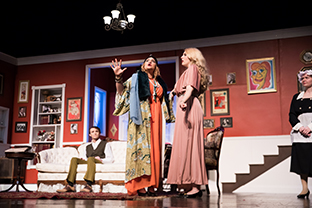 Comedy and murder do not always go hand-in-hand, but for playwright Rob Urbinati, this unusual combination weaves the fabric of his play "Death by Design."  Audiences in the Great Lakes Bay Region will be able to see his play on stage at Saginaw Valley State University Wednesday, Feb. 21 through Sunday, Feb. 25.

Set in 1932, this comedy follows the lives of Edward Bennett, a playwright, and his wife Sorel Bennett, an actress. After a disastrous opening night in London, the couple flee to an English country manor in Cookham. However, unexpected guests start arriving at the manor, and one, mysteriously, ends up dead.

Abigail Burgess, a theatre major at SVSU from Commerce Township, will play Bridgit, the feisty Irish maid who sets out to find the murderer.

Even though the play is set around a murder, Burgess reassures attendees that the show will be anything but scary.

"Normally a topic such as murder would not be humorous, but the script lends itself so well to fun physical and vocal humor that I think the audience will get as much of a laugh out the ridiculousness of it as we have," Burgess said.

Burgess also said the set will transport the audience to England in 1932. From the backdrop to the furniture, she credited the scenic crew for nailing the ambiance of an old English mansion.

"I am so excited to get to work with such a talented group people both on stage and off," Burgess said. "Be it the cast or the amazing directorial or tech crew, everyone has made this experience so fun and rewarding."

The show will run at 7:30 p.m. Wednesday through Saturday and at 3 p.m. Sunday in SVSU's Malcom Field Theatre for Performing Arts. Tickets cost $13 for the public and $10 for students and attendees over the age of 60.