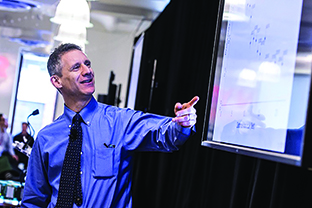 One of the most talked about elections in modern American politics will be the subject of the next installment of Saginaw Valley State University's Visiting Scholars and Artists Series.

Andrew Gelman, director of the Applied Statistics Center at Columbia University, will present “19 Things We Learned About the 2016 Election” Thursday, Feb. 8 at 7 p.m. in Curtiss Hall's Seminar Room D. The event is free and open to the public.

Gelman, also a professor of statistics and political science at Columbia, will assess many of the standard assumptions about the 2016 while applying math and statistics to better understand the politics of that particular moment in history.

Gelman has extensive credentials in his fields of study. He received the Outstanding Statistical Application award from the American Statistical Association, an award for best article published in the American Political Science Review, and the Council of Presidents of Statistical Societies award for outstanding contributions by a person under the age of 40.

Reseach specialties for Gelman include exploring topics such as why it is rational to vote, why campaign polls are so variable when elections are so predictable, and why redistricting is good for democracy. He also has examined the probability that each citizen's vote will be decisive.