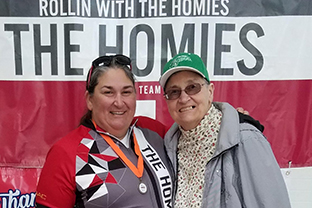 A Saginaw Valley State University staff member overcame what she believed were her own physical limitations as well as rough environmental conditions to earn praise from a national nonprofit for her passion to raise awareness — and funds — to fight multiple sclerosis.

The Michigan chapter of the National Multiple Sclerosis Society this month presented Michele Gunkelman with its Rookie Rider award for her participation in the Great Lakes Bavarian Breakaway event where cyclists rode through Frankenmuth to raise funds in September.

Gunkelman raised $2,790 and biked nearly 75 miles over the course of the weekend event, including a final day in which cold temperatures and rainfall caused 130 of 150 participants to drop out.

Gunkelman, SVSU’s director of Residential Life, was one of the 20 people who endured the harsh conditions. Her driving motivation was the same one that inspired her to sign up for the cycling fundraiser for the first time and train hard for five months.

“I did this for my mom,” she said of Sharen Gunkelman, who was diagnosed with multiple sclerosis (sometimes referred to as "MS") 19 years ago. “When I heard about the terrible conditions on the last day, I thought to myself, ‘Mom can’t wake up this morning and choose not to have MS because of the weather,’ so I chose to keep going."

Michele Gunkelman said her experience helping to care for her 74-year-old mother over the years instilled in her a sense of responsibility to raise awareness and find ways to fight the disease that impacts the central nervous system.

“It’s a scary thing when you or a loved one is diagnosed with MS, because everyone is impacted differently,” she said. “You start to wonder how that person will be affected — like, will she be able to hold her grandchildren?”

Gunkelman said, nearly two decades later, some of her mother’s motor functions are affected by the disease. She at times has challenges communicating verbally and her memory suffers.

“It’s something I don’t want anyone — or their family — to have to go through,” Gunkelman said. “I want to do anything I can to prevent that from happening to others.”

So when a friend mentioned the Great Lakes Breakaway Ride fundraiser, Gunkelman decided to join despite not being an avid bicycler.

“The more I thought about it, the more I wanted to challenge myself,” she said. “Living with MS is hard, and I didn’t want to go easy on myself.”

The Freeland resident set her expectations high: She pledged to raise $2,500 and finish two 50-mile bicycle treks during the event. Meeting both goals involved a lot of work in the months leading up to the September event.

Beginning in April, she rode her bicycle between 10 to 40 miles per day and joined a sponsored team known as “Rollin’ with the Homies” that planned to support each other during the fundraising. Meanwhile, she campaigned hard for friends and family to support her fundraising goal.

“So many people supported me,” she said. “There was a tear in my eye every time I received a donation.”

In total, 50 people contributed to her fundraising goal, which she surpassed by $290.

Gunkelman said she was prepared but filled with anxiety when the Sept. 29-30 Great Lakes Bavarian Breakaway bicycling event arrived. Still, she managed to finish the first day’s 50-mile course. Gunkelman’s mother was present to cheer her on.

“I was drained but amazed I had accomplished that,” she said.

When the next day arrived, temperatures dropped to 41 degrees and a steady rain poured down on participants.

“Some of the more experienced riders were worried about hypothermia,” Gunkelman said. “I felt an obligation to try to finish, though.”

She slipped on a pair of winter gloves and a rain jacket, then set forth among a thin group of participants. Cold and soaking wet, Gunkelman pushed herself 12.5 miles that day.

“That was a challenge in those conditions,” she said. “There was no shame in not completing the 50 miles that day.”

Members of the National Multiple Sclerosis Society cited the St. Clair Shores native’s persevering spirit and supportive nature when presenting her with the Rookie Rider award earlier this month. With the new year approaching, Gunkelman said she already is making plans for a sophomore effort in a 2019 bicycling fundraiser for the nonprofit.

“Supporting the fight against MS is a cause that’s close to my heart,” she said. “It’s such a worthwhile cause.”