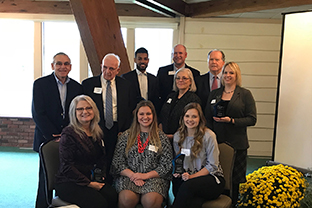 A Saginaw Valley State University student government-led initiative that has raised over $425,000 for nonprofit organizations since 2003 recently received recognition from a group of regional fundraising professionals.

The Mid-Michigan chapter of the Association of Fundraising Professionals awarded its Outstanding Youth in Philanthropy Award to SVSU's Student Association for its work organizing the fundraising competition known as Battle of the Valleys.

“The annual fundraiser initiative is a phenomenal example of philanthropy in action,” said Dick Touvell, the secretary of the Mid-Michigan chapter of the Association of Fundraising Professionals. “SVSU’s ‘Battle’ is, without a doubt, inspiring to countless nonprofit leaders and staff members throughout the Great Lakes Bay Region.”

Battle of the Valleys is an annual student-led charity fundraising competition between SVSU and Grand Valley State University. The competition takes place during the week leading up to the game between the universities’ rival football programs. Students from both institutions select a nonprofit partner each year to benefit from the fundraising effort.

During the most recent Battle of the Valleys in October, SVSU raised $36,210 for the Barb Smith Suicide Resource and Response Network. The funds helped bolster the Saginaw-based nonprofit’s work to prevent suicide, educate communities and provide no-cost, 24/7 aftercare for those affected when prevention is not possible.

Barb Smith, the organization’s founder and executive director, praised the Battle of the Valleys initiative in a letter to SVSU.

“While I continue to be overwhelmed with the fundraising success, I want you to know how deeply touched I was to witness the passion and heartfelt drive of the SVSU community toward this significant university tradition,” Smith wrote. “It was an honor to work with this next generation of leaders who are truly making a difference.”

Since Battle of the Valleys was established in 2003, SVSU has raised over $425,000 for nonprofit organizations. Both SVSU and GVSU have combined to raise over $650,000 during that same period of time.

“It is a great honor to receive this award,” said Cheyenne Wilton, a creative writing major from Ortonville who serves as the SVSU Student Association's philanthropy chairperson this year.

“It is really great to see that the community is recognizing our campus’ efforts to help others. So many of our students understand how important philanthropy is and do whatever they can to help out.”