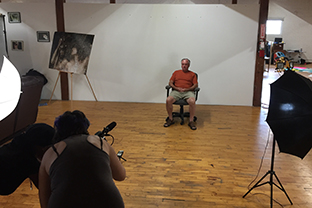 Saginaw Valley State University staff and faculty are collaborating with a New York City theatre group on a project aimed at telling the story of Midwest cities struggling in the wake of industry job loss. The community engagement-driven project includes production of a short documentary detailing the highs and lows of automobile manufacturing in Saginaw.

That documentary, “A Body of Work,” premieres Saturday, Aug. 25, at 7 p.m. at the Pit & Balcony Theatre, 805 N. Hamilton in Saginaw. A panel discussion about the state of the automotive industry and its impact on Saginaw will follow the showing, which is free and open to the public.

The film was produced by Elisa Urtiaga, a community artist, in collaboration with members of SVSU staff and faculty. David Rzeszutek, an SVSU associate professor of theatre, was among the film’s collaborators.

“I'm very interested in working on this project for multiple reasons,” Rzeszutek said. “I’m originally from a Rust Belt city that's going through a renaissance, and Saginaw has a similar blue-collar city story.”

"A Body of Work” in part was the result of a collaboration between the region's arts community and the touring wing of a New York City-based theater group known as The Public Theater. One of the group’s projects, known as The Mobile Unit National initiative, involves bringing productions of the Pulitzer Prize-winning Lynn Nottage play, “Sweat,” to 18 communities across the nation. Saginaw was selected as one of those 18 destinations.

At every stop on the map, the traveling production is accompanied by other artistic engagements relating to "Sweat's" plot, which involves a town struggling with the decline of manufacturing industry jobs. In Saginaw’s case, that resulted in “A Body of Work” and an accompanying photography exhibit from the lens of Nyesha Clark, an SVSU fine arts major from Saginaw. Her exhibit is titled “Blood, Sweat and Gears."

Other events relating to The Mobile Unit National initiative are in the planning stages, including a photo exhibit in September and a spoken-word presentation in November.

The Public Theater Mobile Unit’s Saginaw production of "Sweat" is scheduled Saturday, Oct. 6, at 7 p.m. at St. John's Episcopal Church, 123 N. Michigan in Saginaw. The play is recommended for audiences 16 and older.

“A Body of Work” also was produced as part of The Saginaw Community Arts Outpost, an SVSU-based initiative aimed at engaging the region's arts community in issues facing Saginaw. The U.S. Department of Arts and Culture, a grassroots organization not affiliated with a government agency, recently designated Saginaw as one of its “outposts” for encouraging collaboration within the region's arts community. SVSU was selected as the home base of that “outpost,” now known as The Saginaw Community Arts Outpost. The goal of the initiative: To utilize the arts — including documentaries such as "A Body of Work" and theatre productions such as "Sweat" — to initiate conversations aimed at creating positive dialogue in the community.

More information on the production of "Sweat" and its nationwide tour is available at www.publictheater.org/Programs--Events/Mobile-National/. The following is a video interview featuring author Lynn Nottage discussing the origins of "Sweat."