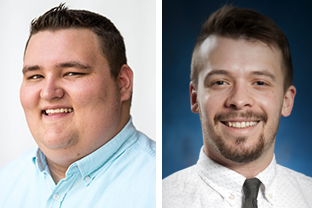 Gabe Kasper, a marketing major from Clare who served as the SVSU chapter's president until recently, won The Clarence E. Brehm Leadership Award at the fraternity's conference in the Bahamas August 1-4.

“When I received the Brehm Award, I was completely dumbfounded,” Kasper said. “As they were reading, I slowly put the pieces together that they were talking about me, and I was in complete shock that I - out of thousands of other AKL undergraduate members -  was the one the National Executive Council chose.

“To me, what I do in AKL isn't something extraordinary. The people who won that same award in the past have gone and done amazing things in their life, and I still cannot believe that my name will be in the same category.”

It has been a very busy year for the fraternity that was only recently chartered on SVSU's campus on March 16, marking the first time a fraternity had been chartered at SVSU in the past decade.

The chapter's advisor, Riley Hupfer, an SVSU alumnus and assistant director of SVSU's Center for Community Engagement, was awarded the Henry T. Moon Outstanding Chapter Advisor award for his outstanding work while advising the fraternity.

During the past school year, members of the SVSU chapter of Alpha Kappa Lambda promoted causes such as sexual assault prevention and alcohol safety education.

The fraternity collects pledges for These Hands Don't Hurt, a national philanthropic organization aimed at preventing domestic or sexual violence. In 2018, the SVSU chapter added a bike-a-thon to raise funds for to local women's shelters. For every $1 raised, members rode an exercise bike for 1 minute. In the past two years, they have raised over $500.

SVSU’s Alpha Kappa Lambda chapter also worked with others to introduce a Glo-Hard Paint and Foam Party in 2017 to provide alcohol safety education as part of Welcome Weekend, which marks the start of a new academic year. Partnering with SVSU’s offices of Student Life and Student Wellness Programs, among others, students who attend the party get party-safe and alcohol-safe tips from our trained students and professionals while foam cannons and luminescent paint cover attendees dancing to music from top local DJs. The first-year event attracted more than 750 people and resulted in donations of $250 to Hurricane Irma relief efforts; this year they hope to draw more than 1,000 students.

While the national awards were given to individuals, Kasper said the 22 fraternity members worked hard to accomplish the recognition received. He looks forward to watching the chapter continue to grow.

“The most rewarding thing was the realization that our leadership and dedication will now lead to a legacy of people to grow as men under the foundation we set,” Kasper said. “AKL really changed my idea of what a fraternity is. Fraternity is so much more than what the media portrays. Greek letters – especially at SVSU – do so much more for the campus and the community, and make a true impact.”