SVSU to host record number of employers at career fair 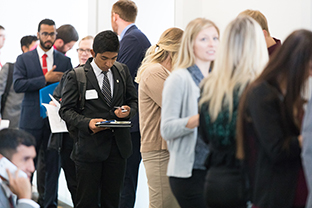 More than 170 employers will seek job candidates during the gathering Friday, April 6, from noon to 3 p.m. in SVSU’s Curtiss Hall. The previous record number of employers to attend an SVSU career fair was 158.

“Attracting over 170 organizations to the employment fair is a win, not only for SVSU, but our entire region,” said Mike Major, director of SVSU’s Career Services, which organizes eight career fairs annually on campus.

“As SVSU continues to draw students from around the state, the Great Lakes Bay Region has an opportunity to keep them here to live, work and play. Participating organizations play a huge part in talent retention, so the growth of the employment fairs demonstrates growth throughout our region.”

The lineup of employers expected to attend the event include companies and organizations at both the local and national level. Among the participants are American Red Cross, Bavarian Inn Restaurant, Covenant HealthCare, The Dow Chemical Co., the FBI, Garber Management Group, Independent Bank, Morley Companies Inc., Nexteer Automotive and Quicken Loans.

A full list of participants is available at www.svsu.edu/careerservices.

Among recruiters, employment fairs continue to grow in popularity as an efficient way to scout talent, Major said.

“Organizations want face-to-face interaction with candidates,” he said. “In addition to reviewing résumés and cover letters, recruiters can learn more about candidates in a conversation. Employers report communication as the No. 1 skill that is lacking in new hires. Employment fairs enable recruiters to measure this important skill, even during a brief interview.”

For more information about the event, contact SVSU Career Services at (989) 964-4954 or careers@svsu.edu.