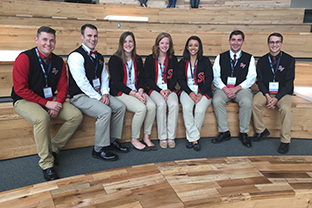 A group of Saginaw Valley State University students have been honored at a national level for inspiring their peers to embrace school spirit and to give back to their campus and surrounding community.

SVSU's Forever Red received the Outstanding Student Organization award from the Council for Advancement and Support of Education (CASE) for District 5, which encompasses colleges and universities in Michigan, Illinois, Indiana, Minnesota, Ohio and Wisconsin.

Forever Red's goals are based on three pillars: connecting with SVSU alumni, enhancing the student experience on campus, and promoting “Red Pride,” a phrase associated with SVSU school spirit.

“There are student advancement organizations all over the country doing some amazing things,” said Bryan Crainer, the group's adviser and SVSU's associate dean for student life and leadership programs.

Forever Red has quickly established itself as an elite student organization in the Midwest. Formed in 2011, it has won the Outstanding Student Organization award twice in the past three years.

Forever Red's growing legacy is a testament to the development of programs geared to engage with alumni and organize fundraising campaigns that support student scholarships. One of those successful initiative is the Cardinal Forever Initiative. Forever Red sells SVSU t-shirts for $1 during Fresh Start, an event aimed at acclimating freshman to life at SVSU during the beginning of the academic year.

“From that first day on campus, when Forever Red sells a freshman a t-shirt, their goal is to share their ‘Red Pride’ in hopes that the feeling rubs off on other,” said Crainer.

Forever Red also generates school spirit through events on campus including a 5K competition during the days leading up to the football Homecoming game as well as "I Heart SV Week," another scholarship fundraising drive that collected $4,200 recently.

“Forever Red understands that the university is at its strongest – and will be into the future –  when its constituents have a deep sense of pride in the institution,” Crainer said.