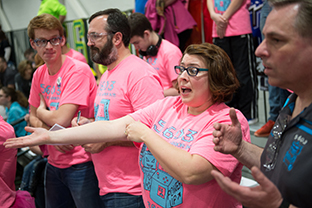 On the outside, Vicki Stoddard this week is clad in pink clothing. As she contemplates her surroundings, though, she can’t help but feel a familiar swell of “red pride” in her heart.

The Bay City Western High School teacher is the founding coach for her institution’s FIRST Robotics team — a pink-themed group known as “Rise of the Warrior Bots” — as it competes in the state championships. The three-day contest featuring 160 high school teams is hosted by Saginaw Valley State University, where the mascot is a cardinal and students often boast about their “red pride” when declaring their school spirit.

Stoddard knows all about that. She is a two-time graduate of SVSU, proudly returning to her alma mater for this week’s occasion.

“It makes me so happy that our team has made it this far, and that I get to come back to SVSU to be part of it with them,” she said. “It’s an amazing experience.”

Stoddard’s group kicked off competition Thursday, and before the closing ceremonies scheduled Saturday, she hopes her team performs well enough to qualify for the world championships hosted later this month in Detroit. If so, it would be the second time in her team’s four-year history it qualified for the final competition.

Each FIRST Robotics season kicks off in January, when teams worldwide are presented with a multi-faceted game challenge that will be used in face-off matches against competing teams. Students square off at regional events, then advance to district championships like the one hosted at SVSU.

The theme for the 2018 FIRST Robotics competition is “Power Up.” It features two alliances of video game characters and their human operators who are trapped in a 1980s-style arcade game. Both alliances are working to defeat the boss in order to escape. In each round, three teams compete using autonomous and remote-controlled robots piloted by students, battling to earn points during a two-minute round.

Stoddard’s awareness of FIRST Robotics was nonexistent before her first year of teaching at Bay City Western in 2014, when a freshman student approached her about assembling a team.

“Bullock Creek High School brought their FIRST Robotics robot to our school one day, and I was really impressed by what I saw,” she said. “I thought to myself, ‘This is manufacturing, this is industry-standard, this is where our future lies.’ I wanted to be part of that. I saw it as a challenge.”

Katelyn Doud, the freshman who introduced Stoddard to FIRST Robotics, recalled how her teacher’s determined spirit rallied the rookie team for a winning streak that landed it in the world championships in St. Louis, Missouri in April 2015.

“And we definitely would not have had as much fun that first year if it weren’t for her,” said Doud, now a senior that serves as team captain. “She really kept us together, especially that first year.”

The Rise of the Warrior Bots has grown in the years since. Stoddard and her students have recruited professional volunteers for help, from organizations such as Nexteer Automotive and Consumers Energy.

After a disappointing second season, the team advanced to the state championship last year, when SVSU hosted the event for the first time. It was a homecoming of sorts for Stoddard, a Reese native who earned a bachelor’s degree in secondary education in 2004 — back when she was known as Vicki DuRussell — and a master’s degree in special education in 2016 at the institution.

Stoddard said the new venue in SVSU’s Ryder Center offered an exciting environment for FIRST Robotics. Teams there gather in the Ryder Center-based Fieldhouse, where students fine-tune machines in make-shift pit-stop stations before moving to the competitions next door in O’Neill Arena. The stadium-like setting is comparable to a sold-out college basketball game, with bleachers brimming with FIRST Robotics participants, parents and fans cheering on the competition underway where a hardwood court typically rests.

“It’s a great place to have this event,” Stoddard said. “I recognize so many professors and staff members who are here, volunteering to help out with things that our team typically has to do on our own at other places. As a person that’s trying to keep her team together, it makes my heart soar to see that.”

The support allows the teams to focus on the competition and the education it offers, she said.

“They need this experience for their future,” Stoddard said, referring to all students involved in FIRST Robotics.

“They need the team building, the personal interaction and the responsibility. It’s a sport for your mind.”

And your spirit, she added. Beyond the mechanical elements, Rise of the Warrior Bots’ 24 students handle fundraising, marketing and “team spirit” duties throughout the FIRST Robotics season.

In the stands at SVSU’s O’Neill Arena Thursday, the “team spirit” work was easy to spot. A sea of pink-shirted spectators cheered on the action. Stoddard was among them, in a familiar setting where her “red pride” had yet to fade.