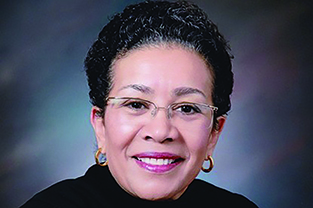 The May 2018 graduating class at Saginaw Valley State University will hear from an alumna who enjoyed a distinguished career as a judge and whose captivating personal story is the subject of a recently published memoir. Marilyn E. Atkins will deliver the Commencement address during ceremonies Friday, May 11 and Saturday, May 12.

The graduating class consists of 999 individuals expected to complete degree requirements who have indicated that they intend to don regalia and march in their respective ceremonies.  In all, SVSU will welcome 1,083 people to its alumni rolls.

Commencement exercises for graduates in the colleges of Business & Management and Health & Human Services will be held Friday, May 11 at 7:30 p.m.. Students completing degrees in the colleges of Arts & Behavioral Sciences, Education, and Science, Engineering & Technology will take part in the ceremony scheduled for Saturday, May 12 at 11 a.m. Each ceremony will be held in O’Neill Arena of the Ryder Center.

Atkins is the longest-serving chief judge in the history of Michigan’s 36th District Court in Detroit, having served in that position for nearly 13 years when she retired in 2012. She holds the distinction of having been appointed by Governor James Blanchard, a Democrat, as a magistrate for the 36th District Court in 1991, and later as a judge in that court by Governor John Engler, a Republican, in 1994.

Prior to her judicial career, Atkins worked as an assistant attorney general for the State of Michigan in the Workers’ Compensation Division. She was appointed to the Worker’s Compensation Appeal Board in 1983. Two years later Atkins became chair of the board, marking the first time a woman or an African-American had ascended to that role. She continued in that position for six years.

After retiring from the bench, Atkins wrote her autobiography “The Triumph of Rosemary: A Memoir,” which was published in 2017. The memoir addresses important topics of diversity and social change. Born to an Italian teen and a married black man in Detroit in 1946, Atkins was adopted by a black couple in Saginaw. At age 19, she sparked a racial and religious scandal by marrying former Roman Catholic priest Thomas Lee Atkins, who was white and 25 years older than she.

Active in her community, Atkins has worked extensively with Detroit youth in schools and churches. She is frequently a guest speaker at youth rallies. Atkins is committed to helping young people avoid crime and she encourages them to fulfill their potential. In addition, Atkins has served on advisory boards for Benjamin E. Mays Male Academy, the National Council on Alcoholism and Drug Dependency of Greater Detroit Area, and the Detroit Urban League.

Atkins completed a bachelor’s degree in psychology at Saginaw Valley State University and a law degree at the University of Detroit Mercy. She has two adult daughters.

For more information on Commencement exercises at SVSU, visit www.svsu.edu/commencement/.