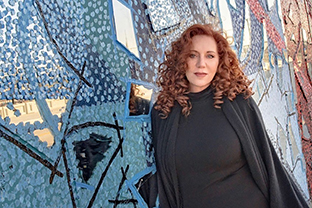 Born in the Motown era of Detroit, award-winning jazz vocalist Kathy Kosins expands the rich history of jazz and soul with her diverse musical taste. She will join the SVSU Jazz Ensemble for a must-see musical performance Thursday, April 12 at 7:30 p.m. in the Rhea Miller Recital Hall.

Kosins began singing in the early 1980s when she sang and arranged the background vocals for producer Don Was, which led her to becoming one of the most sought after session singers. She has released five critically-acclaimed solo albums and has recorded with popular jazz artists such as Terell Stafford, Randy Brecker, and Michael Henderson.

Beyond her personal performances, Kosins has traveled to colleges and universities across the United States to support independent artists by teaching them performance skills and business strategies.

Singing is not her only art form. Kosins also excels as a painter and sells her work at art galleries and concert performances. During her visit to SVSU, she will meet with students and explore the intersection between jazz and painting as well as her live performance.

Her concert is free and open to the public. It is supported by the Dow Visiting Scholars and Artists program at SVSU, which was established through an endowment from The Herbert H. and Grace A. Dow Foundation to enrich our regional cultural and intellectual opportunities.