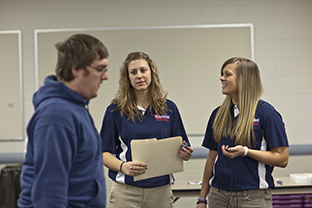 The following story appeared in the fall 2010 issue of Reflections magazine. This story in part spotlighted Jade Fulton, who will be inducted into the Cardinal Athletic Hall of Fame in September 2017. Fulton, one of the most successful pitchers in the women's softball program's history, graduated with a bachelor's degree in athletic training in 2011. Here is the story from the Reflections archive:‌

•    Tyler Beyett, a biochemistry major, received $9,614 to study how a chemical commonly found in plastic water bottles may affect mammal reproduction. In this study, believed to be the first of its kind, he will investigate whether the compound influences which kinds of sperm will successfully fertilize an egg. Previous research has shown that certain compounds, such as dioxin, can influence what happens in the human body; Beyett will continue with a similar inquiry, comparing the DNA of rat offspring with their parents’ genetic material.

•    An award of $1,752 was given to a team of four electrical engineering majors to help them design and build a bicycle that would convert pedal movement into the electricity to charge electronic devices such as an MP3 player or cell phone. Ryan L. Bender, Larry Ferreira, Adam DeSmet and Paul Graczyk hope the reusable energy will decrease the use of wall outlets and promote physical activity.

•    Korey Force, a Spanish and international studies double major, received an award of $2,249 to study the role of women in the 1968 massacre at Tlatelolco, Mexico. In her research, Force plans to use historical records to study how the event affects the role of women in the country's society today. The funds will finance her research trip to Guadalajara, where she already has established a team of scholars during a previous study abroad trip.

•    Kinesiology majors Jade Fulton of Byron and Jillian Peterson were awarded $3,500 to study the risk of injury and cardiovascular disease in local fire fighters. The students’ funding will help provide assessments and education materials, and support the start of a health monitoring and fitness program at three volunteer township fire departments (Saginaw, Thomas and Kochville).

•    Lucinda Wenzlick, a biology major, was awarded $4,619 to study the effects of serotonin on muscle activity. Research has linked this brain chemical with aggressive and assertive behaviors in humans and many other organisms. Wenzlick’s project will study its effects on crayfish, examining the effect the compound has on the speed in pursuing food and the strength of its claws.

Any SVSU student may submit a proposal to receive financial support for research or other creative endeavors. SVSU has committed $50,000 annually to fund outstanding student projects; each student project is eligible to receive up to $10,000. Students serve as the primary researcher, author or creative agent for each project but are guided by SVSU faculty and staff. For more information, visit www.svsu.edu/srci.