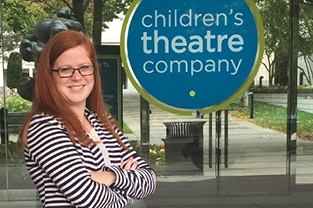 Karli Jenkins’ love of theatre began as a youngster attending summer camps at Saginaw Valley State University, where she later completed her degree. Now she is sharing that love with other children at one of the nation’s leading children’s theatre companies.

One of the first times Jenkins was exposed to theatre was at SVSU’s Fine Arts Day Camp, which still runs today. There, the Saginaw native gained experience as an actress, beginning in fourth grade. Ric Roberts, SVSU professor of theatre, gave Jenkins multiple opportunities to perform on stage, with college-aged students, while still in middle school.

Now Jenkins is translating what she learned in SVSU's classrooms and stages into a career educating thousands of students who annually visit the Children's Theatre Company in Minneapolis, considered by many to be the top children's theatre in the U.S. As a school engagement coordinator, she welcomes over 70,000 students a year on their field trips to the theatre. Jenkins also works with teachers on theatre-based curriculum that connects the plays on stage to content in their classrooms.

"The strong work ethic SVSU taught me and the range of skills I was able to cultivate made me ready for a professional career in a non-traditional education setting," she said.

Jenkins completed her bachelor's degree in theatre in 2013, and felt well-equipped to start her career.

"While attending SVSU, I was exposed to every aspect of theatre: administration, instruction, working at the same fine arts camp I attended as a kid. It wasn't just about acting," she said.

That exposure is where she found her true calling: teaching.

Torn between teaching and directing, Jenkins approached her professor, Roberts, about potential internships. Their discussion led her to conclude that she wanted - and frankly needed - more experience in teaching to really know if it was a suitable option for her. She applied to multiple internships that revolved around teaching and finally landed one in Minnesota.

Jenkins spent nine weeks of the summer before her senior year at the Children's Theatre Company learning to teach. She spent the entire time in classroom settings, gaining the knowledge needed to succeed in this career path and slowly realizing her passion for teaching.

After her internship, Jenkins knew exactly what she wanted to do. During her final year at SVSU, her theatre professors helped shape her curriculum and extra-curricular opportunities to align with her career goals. Jenkins worked with professionals in the field, became more involved in the fine arts day camp, and spent time in classrooms teaching theatre. SVSU cultivated a close-knit community of theatre students, so even during her time outside of SVSU classes and extracurricular activities, Jenkins said she was always gaining valuable experience.

"When I look back at my time at SVSU, I never a see a moment where the learning stopped," she said.