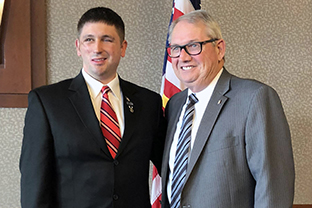 Saginaw Valley State University has been recognized for creating a supportive environment for students affiliated with the military.

Military Times bases its rankings on a survey of each institution's services along with data from the U.S. departments of Defense, Education, and Veterans Affairs. Decisive factors include university culture, academic outcomes, student support, academic policies, and cost and financial aid.

SVSU was ranked No. 108 among 4-year institutions that earned the designation. More than 600 higher education institutions participated in this year's survey.

"As veterans ourselves, we know what the transition is like from the military to higher education and we want to help," said Alford, a former member of the U.S. Navy who now serves in the U.S. Navy Reserves.

"These designations are recognizing SVSU's unwavering commitment to our military students. It is not just a label. It is seeing the value in the experiences and leadership they bring to campus. It is providing them resources. It is a commitment to ensuring student success. It is offering them ways to engage on campus and in the community."

The rankings are published in the Military Times magazine and available online here: https://www.militarytimes.com/education-transition/rankings/2017/11/20/218-schools-make-military-times-best-colleges-2018-rankings/