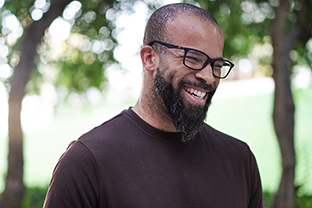 A pair of judges appointed by the United States Poet Laureate selected Douglas Kearney for his 2016 poetry collection, “Buck Studies.” He will receive the honor during a ceremony at SVSU Tuesday, March 27.

The event is part of the 2018 Roethke Poetry and Arts Festival, which spans March 23-28 at locations across the Great Lakes Bay Region.

Kearney works as the interim faculty co-director for equity and diversity at the CalArts School of Critical Studies in Valencia, California.

Kearney's “Buck Studies” uses poetry to explore pain and grief as each relates to racial injustices. The Black Took Collective described “Buck Studies” as “an upper-level seminar where the Black 'I' staggers, revealing absence beyond absence, the compromised subject, one injured yet never inured.”

His other published collections of poetry include "Mess and Mess and," which was a Small Press Distribution Handpicked Selection that Publisher's Weekly called "an extraordinary book." Another collection, "Patter," was a finalist for the California Book Award in Poetry.

His work also has appeared in anthologies such as "Best American Poetry," "Best American Experimental Writing," "What I Say: Innovative Poetry by Black Writers in America," "The BreakBeat Poets: New American Poetry in the Age of Hip-Hop," "Wide Awake: Poets of Los Angeles and Beyond," and "Kindergarde: Avant-Garde Poems, Plays, Stories, and Songs for Children."

A librettist - or an author of the text of an opera - Kearney's work has appeared in three operas. "Crescent City" was the inaugural production of a Los Angeles-based experimental opera company, The Industry. "Sucktion" has been performed across the globe. "Mordake" was performed in San Francisco. Kearney's published collection, "Someone Took They Tongues," offers a series of librettos, including one written in a counterfeit Afro-diasporic language.

This year's prize was selected by judges Natalie Diaz, an author and recipient of the Nimrod/Hardman Pablo Neruda Prize for Poetry, and Timothy Donnelly, chair of the writing program at Columbia University School of the Arts.

Named for the late Saginaw poet who won the Pulitzer Prize in 1953 for "The Waking," the Theodore Roethke Memorial Poetry Prize has been awarded since 1968 to notable poets for a particular collection of poems published in a specific 3-year period. Past winners include former U.S. Poet Laureates Robert Penn Warren (1971) and Robert Pinsky (2008).

The award includes a $10,000 cash prize, which will be presented to Kearney during the March ceremony.

For more information on the prize and associated events honoring Roethke, visit www.svsu.edu/roethke.