Thanks to his family and campus, Napoleon Lewis' legacy at SVSU stands strong years after his death 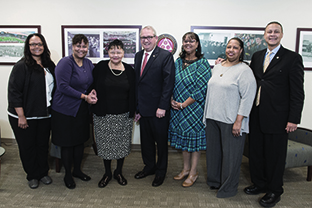 Alberta Lee has an image in her mind. An early memory from childhood, circa 1970something.

She’s sitting with her siblings in the bleachers of a basketball game at Saginaw Valley College, her father working security nearby. Napoleon Lewis Sr. — “dad” to her — stands out in the crowd. But not because he’s an intimidating authority figure keeping order. On the contrary, those surrounding the Shreveport, Louisiana, native are drawn to him. He smiles, they smile; followed often by laughter, like they had known each other for years.

Maybe some of them are familiar with her father, his daughter wonders, but it’s just as likely they’re relative strangers. Lewis made friends with haste, after all ... and in abundance.

“He connected with people like that,” Lee, 56, says now. “People talked to him so easily, and he was full of advice that you could trust. He loved engaging with them.”

And they loved him back. Still do.

Twenty-one years after Lewis died at age 71 of bone cancer, SVSU reaffirmed its affection for one of its earliest and most beloved members by granting him emeritus status in October 2016.

It’s an honor bestowed upon 81 people in the school’s history. A portrait of Lewis now is on display alongside framed photos of the others in the university’s Emeriti Room. It’s a physical link to his legacy at the campus.

Spiritually, his children carry that torch.

Lee, a 1982 graduate and SVSU’s Alumni Relations coordinator from 1986-89, and three of her seven siblings are linked to the school — even without their father’s history there — as students and workers. Ava Lewis, 60, earned the first of four degrees in 1979 and has worked as a professor of nursing since 1994. David Lewis, 53, earned the first of three degrees in 1987 and serves as director of School and University Partnerships. Napoleon Lewis Jr., who attended classes briefly on campus, worked in the Graphics Center for 17 years before his death in 1994.

“Dad would be grinning from ear-to-ear that we’re working here,” Ava Lewis says of her and David. “He thought of Saginaw Valley as the end-all, be-all. He really was a champion of this place.”

Napoleon Lewis Sr., who served in the U.S. Navy in the Pacific during World War II, arrived in Saginaw from Texas in the 1950s. He moved there to join the automotive industry workforce, and eventually opened a business — South End Barbershop — in 1962.

His children remember how Lewis’ affable nature attracted whole neighborhoods to the shop. Customers considered him family. The depth of his hospitality seemed unending. There were occasions he loaned his vehicle to fellow Southern natives who needed to return to their hometowns for funerals.

“You can talk to people to this day about him, and a smile will come to their face,” David Lewis says. “Dad had that embracing style, and the greatest compliment is when someone would compare us to him. We’re working with the social capital that our father began.”

Napoleon Lewis extended that capital to SVSU beginning in 1971. His duties involved patrolling the campus hallways, dormitories and athletics events, sometimes with his children in tow. Few people during those early years on campus failed to recognize him. Many were charmed by him. Some became lifelong friends.

Soon after Lewis was hired, former head coach Muddy Waters brought Lewis aboard as the football team’s first equipment manager. Lewis formed bonds with members of the men’s basketball team, too. Not long before Lewis died in 1995, one of those basketball players from the 1970s learned of his friend’s illness and returned to Michigan from Europe to visit.

“A lot of those players embraced him as a father,” David Lewis says. “He was that close to them.”

When Napoleon Lewis’ biological children began attending classes at SVSU and moving into its dorms, he often stopped by their rooms during evening shifts to visit with them. And with others.

“There were times when I was talking to him when my roommates would get into the conversation and start talking to him like he was their dad,” Lee says.

“I remember thinking, ‘Wait, do you mind if I have a moment with my dad?’ We all enjoyed it when he came around.”

Lewis stepped down from his duties at SVSU in 1986, but returned on a part-time basis in 1991, largely working from a parking booth at the entrance of a now-defunct lot on campus. Even with a more limited exposure to the campus population, Lewis managed to charm a new generation of SVSU people during those final years.

“It was an awesome feeling to see everyone react that way toward him because we, as his children, felt that way about him all the time,” Ava Lewis says. “He touched so many lives here.”

His five living children and wife, 90-year-old Nelia, attended the October Board of Control meeting where the family’s former patriarch received emeritus status. Afterward, they posed for a photograph together, holding the piece of paper that formally established the onetime security guard’s status among SVSU’s most revered figures.

The significance of that paper wasn’t lost to members of the family who saw firsthand how their father once inspired so many smiles on campus.