SVSU commencement: a day of celebration for student who overcame life-threatening disease

‌In Sarah Tennyson’s bedroom, the dozens of cards featuring inspirational quotes only seem to outnumber the smiley-faced stickers by a few.‌ 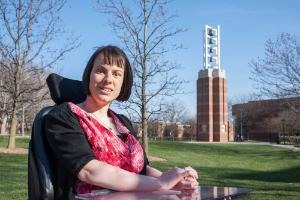 “I like to stay positive and keep a positive outlook on life,” the 30-year-old said.

It's an optimism, she admitted, that at first might seem odd coming from someone once kept alive by a feeding tube; from someone who, long before and well after the feeding tube, has moved through the world largely via wheelchair.

In Sarah Tennyson's world, though, there's plenty to celebrate. And that celebration is sure to grow more jubilant later this week when the Saginaw Township native joins more than 1,000 of her Saginaw Valley State University student peers on stage during commencement ceremonies.

Tennyson, a communications major, will participate in the festivities Saturday at 11 a.m. in O'Neill Arena, when students from the colleges of Arts & Behavioral Sciences; Education; and Science, Engineering & Technology are honored. A 7:30 p.m. Friday ceremony will feature students in the colleges of Business & Management and Health & Human Services.

Tennyson has two classes still to complete, but will be participating in the May Commencement ceremony, which she finds fitting. She always imagined celebrating her accomplishment in the mellow comforts of springtime. It was a fantasy that pre-dated her brush with a disease that nearly prevented her from living to see such a day at all.

Eventually, doctors diagnosed her with gastroparesis, which is a disorder that stops or slows the movement of food from the stomach to the small intestine.