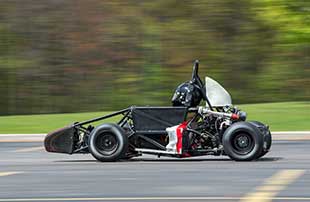 score among exclusively undergraduate programs for the third consecutive year at the Formula Society of Automotive Engineers Collegiate Design Series May 10-13 at Michigan International Speedway.

SVSU placed 45th overall among the 120 colleges and universities from across the world who competed. The Cardinals finished ahead of schools such as Michigan Tech (No. 51), Penn State (No.63) and Purdue (No. 67).

As has become a team trademark, SVSU again designed and built one of the fastest college race cars in the world, finishing sixth in the acceleration category. SVSU has won the acceleration event twice, in 2008 and 2014.

The team has set high standards for itself. Brooks Byam, SVSU professor of mechanical engineering and the team's faculty advisor since 1998, is fiercely competitive and wanted an even better showing, but he knows the students gave it their all.

“I am pleased given the level of competition and all new leadership on our team,” he said. “The students worked their tails off over the past year, and those that are returning are already excited to get started on next year's race car.”

The annual FSAE Collegiate Design Series competition features 120 teams from world-renowned colleges and universities with esteemed mechanical engineering programs. This year’s competition was won by the University of Stuttgart from Germany.

Teams from higher education institutions across the globe design and build Indy-style race cars to compete at the series, which features multiple competition categories such as endurance, acceleration, autocross, cost, presentation, and skid pad.