When it comes to multi-tasking between interests, Norm Wika has a hard time pairing any task with music. Even listening to a music station during drives to work can be a challenge for the SVSU assistant professor of music. Instead, he opts for talk radio.

“If I’m listening to music, I want to be fully engaged in it,” he said. “I enjoy the music more when I can be fully committed to it.”

Wika has not been a stranger to commitment lately. In the fall, he committed to working at SVSU, where he also began leading the university’s bands … and creating one that didn’t exist previously.

After working at Northeastern State University in Oklahoma for nine years, Wika said he and his wife wanted a change of scenery. An opening at SVSU provided more than that.

“The thing that really attracted me here was that the faculty all seemed to be on the same page in terms of the direction of the department, and those goals align with my career goals and personal goals in terms of music and music education,” Wika said. 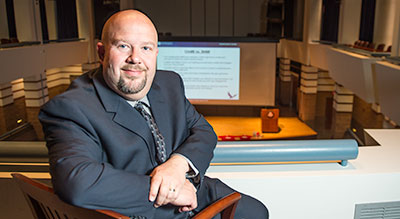 “I felt I had the experience and knowledge that could contribute to the department goals.”

Along with serving as the band director, Wika also created a wind ensemble for student musicians. His expectations: to host one wind ensemble performance per semester.

“I selected a program of music that was fairly standard,” he said. “By the time we got three rehearsals into it, I could see the students were performing at a very high level, so we added a second program for that first semester. That was fun; to be part of the inaugural wind ensemble.”

Wika doesn’t consider leading musical programs or teaching the subject part of his “job,” though.

“I don’t know that music is so much a career as it is a lifestyle for me,” he said. “I do music all day.”

When he isn’t teaching or directing SVSU student musicians, he is fine-tuning his own musical chops. Since moving to the Great Lakes Bay Region, he has performed with the Saginaw Bay Symphony Orchestra as a trombonist. He has played the instrument since he first dove into the lifestyle by joining the school band as a fourth grader in Kansas City.

There were a few moments in those early years where Wika contemplated quitting. But by high school, he was rarely distracted by other interests during a musical journey that led him to SVSU.