As judge, minister and citizen, Manvel Trice is on a mission to make a difference in Saginaw 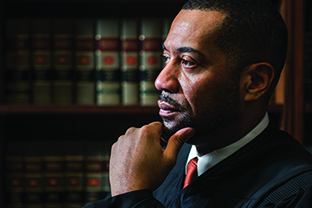 ‌Manvel Trice III doesn’t reside in Room 306 of the Saginaw County District Court. He presides there.

Still, the courthouse’s newest judge speaks about his position as if the role was more comparable to that of a household’s authority figure as opposed to a law enforcement official appointed by the state of Michigan. And he speaks about the work he performs in his courtroom — Room 306 — as if he was providing parental-like guidance to those living beneath his roof.

To Trice, that makes his responsibilities more than simply a job. He is on a mission to work as a steward for the place he calls “home” and serve as a role model to the residents he considers extended family.

“I want to help the Saginaw community continue to be a successful, thriving community once again,” he said. “This is my community. Our community.”

Born in the city of Saginaw and raised in Saginaw County’s Bridgeport Township, Trice’s sense of civic responsibility was initially shaped by the blue-collar upbringing his mother and father provided during his formative years.

Later in life, he was empowered and encouraged to pursue a career in law by two mentors he met while enrolled as an undergraduate student at SVSU in Saginaw County’s Kochville Township.

“I wanted to be someone who could become part of the solution rather than someone on the sidelines, talking about solutions,” he said. “Now I have a broader platform to help people.”

That platform extends beyond the courthouse in Saginaw’s Old Town district and involves tools other than his judge’s gavel. Trice, an ordained minister, also strives to make a difference in people’s lives on a metaphysical level.

“There is a spiritual component to the revitalization of Saginaw,” he said.

“I try to use my position as a minister to help people with issues of the heart. I prefer to address the whole person; body, soul and spirit.”

Trice and his at-home family — his wife, Caressa, and their 3-year-old daughter, Maya — are active with nonprofit organizations and charities involved in addressing Saginaw’s social challenges.

His day job, though, keeps him plenty busy tackling one of the community’s largest challenges: crime. It’s a responsibility he approaches with a passion he learned early in life.

“When I was young, I didn’t know I was going to become a judge,” Trice said. “But the lessons my mom and dad taught me molded me, so in large part, they are responsible for who I am. The things I was taught as a child — patience, love for community, and family values — all are important qualities for any judge to have.”

His parents’ influence also provided another important lesson he applies to different aspects of his life.

“With anything in life, if you’re going to take on a project, you need to do it with passion and commitment,” he said.

Trice credits the beginnings of his devotion to law to two men he met while attending SVSU in the late 1990s: then-President Eric Gilbertson and current President Don Bachand.

At the time, Bachand was Trice’s criminal justice professor.

“There were things he taught me that were critical to my success today professionally,” Trice said of Bachand. “He also taught me things about being a man; things that supplemented what my dad and other men taught me.”

Bachand, a former Detroit policeman, was instrumental in Trice landing his first jobs relating to law enforcement. Trice served as a youth care specialist at the Saginaw County Juvenile Detention Center and later as a data collection specialist for the Saginaw Gang Task Force.

While at SVSU, Trice also enrolled in a Constitutional law course taught by Gilbertson, a former attorney.

“It was an eye-opening experience,” Trice said of the class.

What may have been an even more important experience was a meeting Gilbertson once requested with Trice.

“He invited me into his office and really opened the door to the law,” Trice said. “He encouraged me to attend law school and told me what I needed to do to become eligible. No one had ever before encouraged me to pursue the law. He saw something in me that I didn’t necessarily see in myself.”

Soon after, Trice began taking law school admissions tests and speaking with admissions representatives from institutions across the country. After earning a bachelor’s degree in criminal justice from SVSU in 1998, he attended the Michigan State University College of Law, where he graduated in 2001.

“I would not have chosen that path if not for the sage wisdom of Drs. Bachand and Gilbertson,” he said.

Trice became a defense attorney at Braun Kendrick PLC in Saginaw from 2001 to 2011. Then he was hired as an assistant prosecutor for Saginaw County until 2015, when he spent 11 months as an assistant U.S. attorney. Gov. Rick Snyder appointed Trice as a Saginaw County District Court judge in 2016, when he replaced the retired M.T. Thompson.

At Trice’s swearing-in ceremony in August, Gilbertson was in attendance. Bachand was chosen by Trice to ceremoniously present him with his judge’s robe at the event.

Bachand addressed those in attendance, praising his former student.

“SVSU is honored to have graduated Manvel Trice,” said Bachand, who discussed Trice’s work with SVSU’s Alumni Relations board and willingness to mentor students.

“He’s also really good at talking to young people about life and decency, honesty and fairness,” the president said.

The comments were the ultimate compliment for Trice, who prides himself on providing a positive influence on others, both inside and outside of Room 306.

“It behooves us as professionals to try and bring out the best in people,” Trice said.

“Now that I’m in a position to do so, I feel an obligation to help others realize their full potential. For those of us who want to see Saginaw thrive, we all have to do our part. This is my part.”