Sloan Klaski looks to the future with excitement and a smile on his face as he describes his goals in the years to come. Many Saginaw Valley State University graduates share his positive outlook; few have faced as many obstacles. 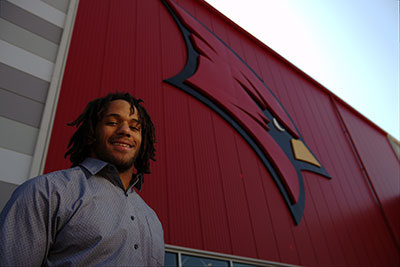 A standout football player at small Harbor Beach High School in Michigan's Thumb, Klaski was featured on the front page of The Detroit Free Press sports section in November 2012, but not for making plays on the gridiron. "Klaski leads from the sidelines," the headline read, a reference to how he supported his teammates through an injury that denied him nearly all of his senior season.

Klaski came to SVSU to play linebacker while majoring in both criminal justice and marketing. He recorded 47 tackles in each of his first two seasons before injury struck again, forcing him to miss the 2016 season.

Life has taught Klaski a lesson or two about determination, so while he graduated in May, he is not finished in the classroom or on the football field. Due to his injury, he has two seasons of college eligibility remaining and a graduate degree in his sights.

When Klaski completes his football career, he plans to serve his country.

"I'll be getting my M.B.A. through SVSU," he said. "My goal is to end up getting into a federal law enforcement agency, whether that's the FBI or DEA, something like that."

For his senior seminar, Klaski took a class with Joseph Jaksa, SVSU associate professor of criminal justice. Having worked closely with Klaski, Jaksa has confidence that he is moving forward with a good head on his shoulders and a highly desirable skill-set.

"There are a lot of students in the United States who have good grades in the criminal justice program," Jaksa said. "Sloan has the benefit of outstanding grades in criminal justice plus the successful rigors of a student-athlete. That's going to show any federal law enforcement agency that this young man is going to be capable of taking on the stresses and rigors of their agency."

Though many students struggle to identify their field of study within their first few years of college, Klaski wasn't one of them. He described the desire to go into the field of criminal justice as a family business.

"Multiple members of my family were in the military including my dad, grandpa, two cousins and an uncle. That's part of the reason why the job I wanted to pursue was a service-related job."

The connection didn't stop there. Klaski explained that he also has a cousin who went the route of law enforcement, working as a police officer, as well as a close friend who works as a border patrol agent.

"All of these people have helped influence my journey and helped to steer me in the direction I'm headed," he said. "Ultimately, I would like to join the FBI and eventually become part of their special forces on the hostage rescue team."

Klaski has refused to let injuries stand in the way of helping others. While sidelined, he actively worked with young people through SVSU's Community Youth Days and Special Olympics.

"Sloan is one of those rare exceptions where he does everything 110 percent," Jaksa said. "A lot of people say they do it but Sloan really does. Between his grade point and knowing the amount of work he has to put into his classes to get that and being a football player: That's not an easy thing to do. There's no doubt in my mind that anything Sloan decides to do, he's going to be outstanding at it because of his mindset."

SVSU offered Klaski the chance to not only pursue his career goals and follow in the footsteps of so many of his family members before him, but it also gave him the opportunity to step out onto the field in a Cardinals uniform and play the game he loves every fall.

For this and so many other reasons, Klaski is grateful to SVSU.

"It just felt like the right place for me," he said.

Four years after arriving -- with degree in hand -- it will remain his place for a little while longer.