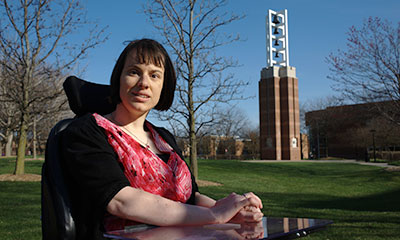 ‌‌“I like to stay positive and keep a positive outlook on life.”

Sarah Tennyson's optimism at first might seem odd coming from someone once kept alive by a feeding tube, she admitted.

In her world, though, there is plenty to celebrate, and her celebration grew more jubilant recently when the Saginaw Township native joined more than 1,000 of her Saginaw Valley State University student peers who participated in the May 2017 commencement ceremonies.?

Tennyson, 30, has two classes still to complete, but participated in the May ceremony, which she found fitting. She always imagined celebrating her accomplishment in the mellow comforts of springtime. It was a fantasy that pre-dated her brush with a disease that nearly prevented her from living to see such a day at all.

Eventually, doctors diagnosed her with gastroparesis, which is a disorder that stops or slows the movement of food from the stomach to the small intestine.?